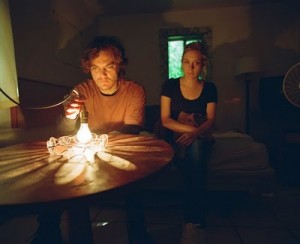 The racing ostriches. The tiny man dancing on a clear-cut stump in the snow. Endangered flamingoes named McNamara and MacDougal. Plates of shivery black Jell-o offered up as a treat in a Norman Rockwell-styled tableau vivant. Meaninglessly meaningful offerings of basketballs. Brad Dourif spooking Michael Shannon. Werner Herzog does not need special effects. In his David Lynch-produced procedural, “My Son, My Son, What Have Ye Done?” the Teutonic seeker of “ecstatic truth” bends the fictions of television narrative to his eccentric ends. It could well be “CSI: Tierra del Fuego.” Shooting a script he’d written several years ago (with Herbert Golder, a classical civilization professor he’s worked with before), the 67-year-old director tells a story based on the real-life case of Mark Yarovsky who became obsessed with Euripides’ “Orestes” and killed his mother with a prop saber. Michael Shannon and Grace Zabriskie (“Twin Peaks,” “Inland Empire”) played the fiction son and mom. As Brad McCullum, Shannon does torment with his usual lack of fuss and surplus of dither; Chloe Sevigny, playing a member of Brad’s cast as well as his fiancée, has a wealth of deadpan delivery as she tries to explain his behavior, accompanied by her pronunciation of “Braaaad.” Udo Kier is his acting mentor: a sentence that may never have been written before. Where “The Bad Lieutenant: Port of Call New Orleans” rollicks, “My Son” simmers, and the choice of shooting on the run with the RED camera video system creates a bleak look, with a Stygian shimmer of red hues and silver-to-black shine in almost every scene. Even a scene along the rapids of Peru’s Urubamba River is oppressively overcast. The director of over forty features is a funny man, as “BL: POCNA” (out on DVD this week) amply declaims, but “My Son” is more funny-peculiar than funny-aha! (A pivotal scene introduces a talking box of Quaker Oats.) Willem Dafoe’s detective character is as mystified as anyone by the meaning of the foodstuff. The genius of “My Son, My Son, What Have Ye Done?” (a line spoken at an especially dramatic moment) is in not caring how the elements piece together: the mood of the movie will likely reflect the mood of any given moviegoer. 91m. (Ray Pride)

“My Son, My Son, What Have Ye Done?” opens Friday at the Music Box.