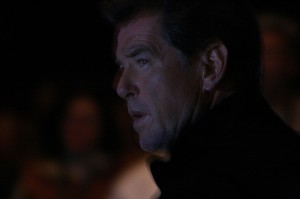 Since its Sundance 2009 debut, “The Greatest” has gotten flak from a flotilla of reviewers for its sometimes eccentric story structure and for its overt melodrama. But my first word was “Wow,” after writer-director Shana Feste’s debut feature killed an entire notebook for me (there’s so much filigree to footnote in a gorgeously acted, poetically written and, yes, elliptical story). If you’re lucky enough to be caught up in it, it’s a magnificent, heartfelt romantic melodrama about family lost and family gained, with startling acting, particularly the detailed frustrations of parents played by Pierce Brosnan and Susan Sarandon, bold yet telling production design—a worthy great-granddaughter to the films of Douglas Sirk. I think I spied at least one great homage to a particular painting of Vermeer, and there is a marital bed that is at once mid-twentieth-century modern and suggestive of a troubled long-term marriage and, most strikingly, it evokes the killing cages that painter Francis Bacon often entrapped his screaming popes within. John Bailey, Feste’s cinematographer, shot “Ordinary People,” which  Feste cites as a primary influence. I was shaken, almost as much as the multiple women near me whose shoulders were quaking during the debut’s end credits. Carey Mulligan, as the pregnant girlfriend of a son who dies too soon on the basis of her charming, open, dare I say, American performance, you would not guess is a girl from Surrey. “An Education” (out on DVD this week) cemented the young actress’ reputation, but she’s very, very good here as well, twinkling and self-contained. 104m. (Ray Pride)

“The Greatest” opens Friday at Landmark Century and Landmark Renaissance.