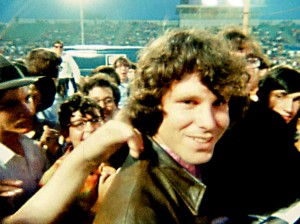 Tom DiCillo directs a useful, if unspecial documentary about the L.A. rock band The Doors. His perceptive narration is read by Johnny Depp and illustrated with concert clips, TV broadcasts and about forty tracks. Known for indie dramas and comedies, from “Living in Oblivion” to “Delirious,” DiCillo has more recently directed four episodes of “Law & Order: Criminal Intent.” He commits misdemeanors of form in “When You’re Strange.” Restricting himself to footage shot between 1966 and 1971 is a dubious purism, maybe like the band’s (almost) never selling a song for a TV commercial, as attested in the film’s last line. This chronicle lifts too many scenes from “Hwy: An American Pastoral,” a film Paul Ferrara shot in 1969 with the group’s singer-poet Jim Morrison driving around the desert. DiCillo only cites the source of these useless interludes in the end credits. Until then, Morrison looks like a Morrison look-alike, especially when he listens to a radio news bulletin announcing his 1971 death in a Paris bathtub at age 27. I’d rather see more of the earlier film Morrison made that got him a “D” at UCLA film school. Besides his inert montages, NYU grad DiCillo edits corny symbols with extreme close-ups of lit matches. For a cultural essay on sixties psychedelia, “When You’re Strange” needs more context about the country’s rock and poetry scenes. It’s interesting to learn that The Living Theater altered Morrison’s showmanship. And it’s odd to see all the cops standing around him on stage at concerts, but to salute this ostentatious substance-abuser for “constantly challenging censorship,” as DiCillo does in his press notes, is taking more than poetic license with his legal messes. With Ray Manzarek, Robby Krieger and John Densmore. 90m. (Bill Stamets)

“When You’re Strange” opens Friday at the Davis.