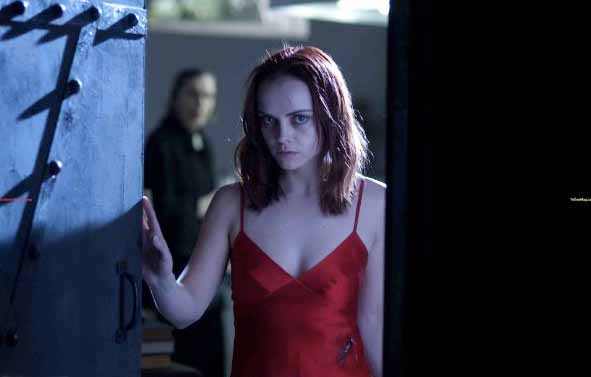 Eliot (Liam Neeson, “Kinsey,” “Taken”) either injects a powerful muscle relaxant (the make-believe “hydronium bromide”) into people incorrectly declared dead by the local coroner, then buries them alive, or this mortician is cursed as a corpse-whisperer. The first one was his mother’s. He listens to their unceasing insistence they’re not dead, and berates deceased in-denial schoolteacher Anna (Christina Ricci) after a car wreck: “You’re a corpse, Anna, your opinion doesn’t matter!” Anna cannot feel her pulse, but sees her breath fog a mirror. Eliot could be dead, too, although that possibility, posed in a single line of dialogue, is not long-lived in the script by director Agnieszka Wojtowicz-Vosloo and her co-writers. With its meaninglessly punctuated title, “After.Life” contains a lineage motif: Eliot handles Anna’s late piano teacher and also mentors her student. This morbid boy lives with his aged mother or grandmother, although she may not be living with him, since she is only seen sitting in a chair in front of a TV showing really, really old black-and-white programs. (This apprentice inters a live chick he abducts from a science project in Anna’s classroom.) Other dead-end allusions link a nosebleed, red hair dye, spilled red wine, a red Volvo, the red box for an engagement ring, a slinky red slip, a pulsing heart and a blood-flecked bobble-head doll. The score, shock chords and sound design are utterly routine horror-style, despite Wojtowicz-Vosloo claiming her debut feature is elevated by arty “European” ambiguity. With Justin Long, Josh Charles, Chandler Canterbury and Celia Weston. 103m. (Bill Stamets)