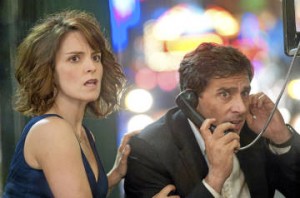 I laughed. I didn’t cry. My immediate reaction to “Date Night” wasn’t, “That could have been worse,” but, “That’s not bad at all.” The biggest problem with this version of “After Hours” re-orchestrated for dual instead of single voice is systemic: the pairing of the verbally fleet Tina Fey and Steve Carell is filled with felicities and asides in the midst of inane, pile-on screenwriting. They’re doing needlepoint in a thunderstorm, a deluge of gunfire and car chases and ill-motivated mayhem. And that’s the dilemma of modern mega-deca-million-dollar filmmaking: a story about a couple from New Jersey whose big night out in the city who find their seemingly small lives in counterpoint to a big, bad world of New York low-lifes cannot exist without a thunderous, ripping car chase along Yonge Street in Toronto with a climactic pile-up through downtown Los Angeles that does not end on location under one of Manhattan’s glorious bridges. The good news: Shawn Levy’s under-ninety-minute confection is rich with Fey-Carell loony-goodness that oversteps its welcome only in the outtakes at the very, very end of the movie. There’s a whole lot of comic filigree in this hefty drapery. (It’s another single-night Levy narrative, but one that is gloriously free of Ben Stiller.) But the unused jokes at the start of the credits are swell, demonstrating just how much the TV-trained pair brought to the project, like Martin and Lewis ripping on a Hope and Crosby “Road” picture. The supporting cast “over-eggs the pudding,” as the English might say, including Mark Wahlberg, Mark Ruffalo, Leighton Meester, Taraji P. Henson, Common, William Fichtner, Mark Ruffalo, Kristen Wiig, and a pair of tattooed young con-artists whose single scene of spitting-image bickering is good enough but ought to have been great. Moral of the story: love the one you’re with, especially if their bottom looks the way Tina Fey’s looks in a black bustle of a cocktail dress, and never, ever, swan in on someone else’s restaurant reservation in New York City. 88m. (Ray Pride)