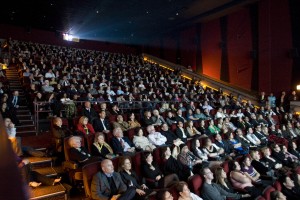 “When we began, barely 500 people showed up to see the films,” says Pepe Vargas, director of the Chicago Latino Film Festival. “Now it’s gotten to the point where it’s more than 30,000.” This Friday marks the kickoff of the twenty-sixth annual Chicago Latino Film Festival. With programming beginning at the Landmark Century Centre Cinema and the Instituto Cervantes, the festival will showcase more than 120 films, documentaries and shorts from around the world. “It used to be New York and San Francisco,” says Vargas, about outside perceptions of cultural hubs in America. “Now for Europe and Latin America, when they look at the States, Chicago is occupying an important point on the map.” Ricardo Gamboa, a Chicago-born performance poet shares a similar sentiment, “There’s the Nuyoricans with stories in New York, Cubans from Miami, the very pastoral lives of Texas, but our [Mexican-Americans in Chicago] stories are often ignored.” Gamboa will be premiering a short titled, “The Southside has Many Beauty Queens” at this year’s festival. “It’s about South Side Latinos, and those that are denied opportunities. And that’s not an old story, it’s continuing generation after generation,” says Gamboa. The festival runs until April 29, and individual screening tickets as well as package deals are available. “The films keep moving and evolving and reflecting what is going on,” says Vargas. “Every year is different.” (Peter Cavanaugh)