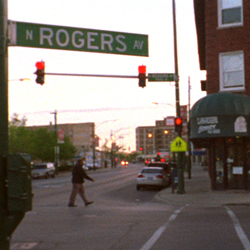 Ah, the city symphony. With “The Indian Boundary Line,” Virginia-born Chicago musician and filmmaker Thomas Comerford portages a trace, now Rogers Avenue, once the boundary set by the 1816 Treaty of St. Louis between the United States and “Indian Territory.” Almost a dozen texts are read by different male and female voices, others are displayed in words, hieroglyphs and mapping as if drawn on parchment, while images of modern-day Rogers Park collide with this murmured history, shot in Super 8, 16mm and 8mm. Seasons come, ice cream trucks go. Found sounds pattern like music. The world fractures into grids and wanders down alleyways and paths. It’s the work of a Missing Immersions Bureau: we walk atop and through history, history doesn’t resist. (41m.) Shown with Comerford’s 2005 “Land Marked/Marquette,” landscape studies of sites and monuments in Chicago connected to the 17th century explorations of Jesuit missionary Jacques Marquette. (23m.) Comerford will appear. (Ray Pride)