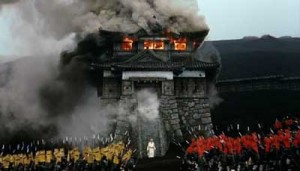 Akira Kurosawa’s savage, bold, elemental “Lear” must be seen. One of the most lavish celebrations of the centenary of Japanese filmmaker Akira Kurosawa is Criterion’s immense “AK100: 25 Films by Kurosawa,” a coffee-table fetish replete with books and shiny-shiny all kinds of stuff. But for those of us with a few hundred dollars less to spare, a fresh 35mm print of his epic “Ran,” (1986) a tale of history versus its sons, the feudal drawn as modernity, his twenty-seventh feature, is to see something almost unmoored from time, a singularity of man cast upon seas of madness. It’s almost as if the time spent in the years Kurosawa had been kept from behind the camera meant that Kurosawa had to make a movie that was several movies in one: the chef de cuisine would go down with his kitchen if he had to. The battle scenes are like watercolors written in lightning.  The most expensive Japanese film of its time, with not a yen ill-spent. 160m. (Ray Pride)