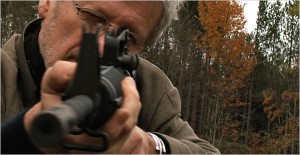 French video artist Michel Auder’s four decades of self-video-ification makes for some self-serious solipsism in this “fictional biography” assembled from a reported 5,000 hours of raw footage by Auder and co-director Andrew Neel. “The Feature” constructs a life of a French bohemian and pioneering video artist who married Warhol muse Viva, and later, photographer Cindy Sherman. There’s explicit sex and drug use and reflections on a time past and time passed, and the most affecting aspect may be the quality of some of the video: degraded, fuzzy, buzzy, lo-fi in an HD world. Fame-dropping is rife. Over the course of time, Auder’s philosophy reveals itself as deeper than narration like “Usually, you eat, you get laid, you’re worried about money, you have money, you’re happy, you’re sad, you cry, you have more sex, if you’re lucky and then, you know, there’s nothing left in life, it’s just what it is.” This is raw stuff, elusively structured with the foreknowledge of mortality. 177m. (Ray Pride)