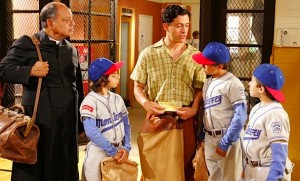 In 1957, the Monterrey Industrials crossed the border into the U.S. and won thirteen games in a row to emerge as Little League champs. For the past fifty years, as many as fifty pitches to make a film about the feat were vetoed by the team, claims screenwriter W. William Winokur. The team took a swing at his, however, and struck out. The first ten minutes of “The Perfect Game” contains an eye-rolling checklist of trite lines, shots and musical cues, even if the last ten minutes yanks happy tears of triumph with its functional cliches. It’s “an underdog story,” points out one of the twenty producers. Storylines include embittered Cesar (Clifton Collins, Jr.), the one-time towel-fetcher and jockstrap-washer fired by a Major League team who finds a new calling as coach of the kids. He shaves, stops drinking and gets sweet on a local señorita with a strict dad. Up north there’s a plucky gal who breaks into the sports beat to cover the story. And then there’s the embittered foundry worker who overcomes his grief for a dead son just in time to cheer his other son pitching the historic game in the title. As in a string of recent sports dramas, civil-rights issues test the mettle of athletes on the road. As a white Texas newspaper editor notes: “the wetbacks winning sells more papers.” Winokur and director William Dear (“Angels in the Outfield,” “Harry and the Hendersons”) take that business plan to heart. With Cheech Marin, Emilie De Ravin, Bruce McGill, Patricia Manterola and Louis Gosset, Jr. 118m. (Bill Stamets)