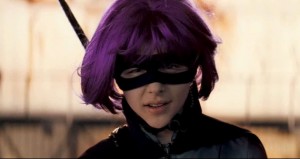 Oh boy, the “Hit Girl” is gonna hit the fan.

While Matthew Vaughn’s comics adaptation “Kick-Ass” has a nerd-tacular, recessive male lead, David Lezewski (Aaron Johnson), its solid center is 13-year-old Chloë Grace Moretz, playing Mindy, the daughter of a disillusioned former cop (Nic Cage) out to avenge his wife’s death by New York’s most powerful gangster. Yeah, it’s a parody of a pop plot that jibes superhero potboilers even while indulging familiar excess. Still, it manages to be antisocial in ways that movies costing over, say, a couple million dollars, don’t often indulge.

The unrated “red band” trailer that’s been online gives up two of the most extreme words that come out of Mindy’s mouth. The character’s a tsunami of surprises if you haven’t been tipped off in advance. Based on the comic by Scottish writer Mark Millar (“Wanted”) and illustrator John Romita, Jr., Vaughn aims high at the lowbrow. He’s also able to bridge the financing for his movies when studios balk. He’s well-off and connected. Before “Layer Cake” and “Stardust,” Vaughn’s earlier features, he was Guy Ritchie’s producer. His screenwriter on “Stardust” and “Kick-Ass” is Jane Anderson, who’s married to Jonathan Ross, the highly paid BBC television presenter who was furloughed after his own foul-mouthed incident, a prank phone call involving Russell Brand. And of course, Vaughn’s married to the model Claudia Schiffer. (Vaughn’s self-referential moments, more grandiose than any Richard Donner would make, include a huge billboard of the mother of his children at the center of a scene, signed by Mario Testino, as well as a yellow Range Rover, as in “Layer Cake,” meeting a crushing fate.)

Johnson plays Dave as a dewy-eyed distant carbon of Daniel Radcliffe, so desperate to get close to a girl he likes to go along with her presumption he’s gay. “Like most people my age, I just existed,” he mopes in voiceover as we’re offered Pepsi cans adorned with soiled tissues to admire in the teen’s trash basket. There’s at least nifty vulgar verisimilitude in the plaints in his voiceover at first, and the character makes modest japes at the absurdity of the teen-turned-superhero genre. He orders a mail-order costume after his latest whomping by the local no-goods, and decides to become a superhero. You’d hope for some Roger Corman New World Pictures-era spunk, some Allan Arkush-Joe Dante-style spunk. It happens in spurts: Whenever the supposed “A”-plot of Dave as “Kick Ass” gets moony, things shift back to Cage’s “Big Daddy” and daughter “Hit Girl.” Cage and Moretz both play it wide-eyed as father and daughter share a love of armaments. It’s not precisely girl empowerment. Let’s start with mass murder and clamber back down from there.

Under her polyester violet wig behind a black bandit mask that obscures most of her features, Moretz works up a scowl that doesn’t so much sexualize her adolescent violence toward the bad, bad men and vampy villain women as encapsulate, in her single, stock squint, what Liz Phair’s “Girls! Girls! Girls!” lyrics describe as “what the girls call, what the girls call / What the girls call, the girls call murder.” Her blue eyes are bright and she furls her lips as she makes her threats: is she old enough to have been allowed to watch Klaus Kinski movies yet? Her stock line in interviews: “Think Jodie Foster, Natalie Portman and Uma Thurman rolled into one.”

She’s a sprite filled with spite. The movie lights up when she moves in. A den of stereotypical gangstas meet their match when Hit Girl spears, machetes, tenderizes, shoots and bludgeons them to death to “The Tra La La Song” from the “Banana Splits” television show. The cutting and stylized geysering of slow-motion, computer-generated blood goes Asian places: it’s not what you’d expect from a movie that got an R-rating from the U. S. ratings board. The glimpses of Vancouver-as-New York City amuse; a Tim Horton’s coffee shop belongs in every comic-book movie. The range of absurdity—Dave’s inamorata reminds him, “You know I volunteer at the needle exchange”—often surprises, and the edge of the extreme digital color saturation matches nicely with the gangster’s skyscraper aerie, furnished with artworks by the likes of Damien Hirst and Ed Ruscha, some from Vaughn’s own cache. There are gorgeous frames filled with design elements influenced by neo-noir like John Boorman’s “Point Blank,” but it all rides on the shoulders of a tiny 13-year-old squint-faced twirp with a foul mouth. (Her character gets punched in the face more than once, a fate she didn’t suffer as the semi-sufferable little sister in “(500) Days of Summer.” Sam Fuller would surely say “What the fuck!” to this blunt instrument, sometimes sentimental, always sarcastic, transgressive despite its snark, but he would be chewing mightily at his cigar as he said it.