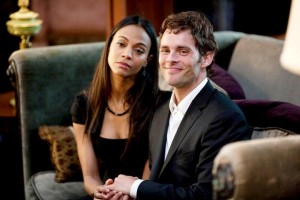 Neil LaBute’s remake of “Wedding at a Funeral” may be the most LaBute-esque production yet. An aspect of the “auteur theory” is the idea that a film director’s personality will come through, whether in projects developed by himself or as “work for hire” for others. While LaBute has adapted scripts by others (“Lakeview Terrace”) and done remakes (“The Wicker Man”), he says he prefers the phrase “I’m free to choose what interests me.” Considering how even more prolific the 47-year-old writer-director is as a playwright, it’s fine to grant him that claim. But the remake of Frank Oz’s 2007 farce, credited in both instances to screenwriter Dean Craig, packs aspects of the LaBute personality into every cranny of the storytelling. Chris Rock and Martin Lawrence play a pair of brothers who can’t hold their family together at the funeral at the home of their super-wealthy doctor father. Complications are rife, from hallucinogens mistaken for Valium, to the cranky uncle (Danny Glover) in a wheelchair exploding shit across a bathroom filled with conspirators in the murder of a small stranger (Peter Dinklage repeats) who claims to have been their father’s lover. The staging is theatrical: LaBute’s adaptations of his own chilly work are proscenium-driven. Chris Rock can’t act, but declaims center-frame: star center stage. But the fact that this may be the most misanthropic of LaBute’s movies perhaps would surprise even the director upon reflection. The characters, admirably, are to a person, despicable shits. Hateful. Selfish, passive-aggressive, mean-spirited, hateful. Then Tracy Morgan barks nonsense. Then Danny Glover soils himself. You want the fires that end “Lakeview Terrace” to come and envelop them all in an instant—whoosh!—like Hiroshima on the hillside. There’s enough flop sweat to float the barren cement boundaries of the Los Angeles River through the entire spring season. Still, the wheels churn in this consistently vulgar crowd-pleaser, and with its discomfort levels about family worth hating, bodily functions exposed and interracial homosexual relationships between a paterfamilias and a small person “on the way down-low,” it may well draw crowds. (That and Roger Ebert calling it the best comedy since “The Hangover.”) Or, as LaBute put it in an interview with Filmmaker magazine this week, “Yeah, you know, it’s good to put your hand in the toilet every once in a while, but it’s also good not to think about those things, too. Watching Tracy Morgan goof off for half a day is not a bad way to spend the afternoon.” The thankless cast includes a weirdly puffy Luke Wilson, the striking Zoë Saldana, James Marsden as her beatifically stoned boyfriend, Keith David, Regina Hall and Rebecca Devine. 99m. (Ray Pride)