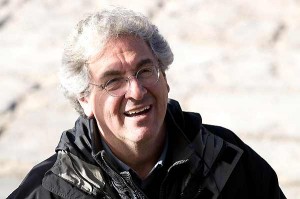 Two lecterns sit beneath the screen at Film Row Cinema in a Columbia College building. One, wooden, appears to be like any other lectern; the other, gray, looks like a converted bookcase. The lecterns and chairs behind them remain empty as the background “evidence” for tonight’s debate is presented to the audience. The topic? “Happiness,” Todd Solondz’s controversial 1998 film about pedophilia, masturbation, murder and unhappiness, among other fun themes of human depravity. The evidence is funny to the crowd; it’s disturbing to the crowd. There are times that dialogue cannot be heard over the laughter of the Columbia crowd, and there are moments of the dead silence of collective discomfort.

Harold Ramis watches from the very back row where his celebrity, his big belly and his bigger beard all go unnoticed by the crowd. In a referee shirt, Ron Falzone explains the rules of “Cinema Slapdown,” a debate on divisive films. This event, which he says “has gone from a cult…to a ‘thing,'” will be the last of its kind until the fall.

After a brief introduction, Falzone calls for the night’s combatants. Dr. Fred Miller, a slender and balding Chicago psychiatrist, will man the gray lectern on the right, and to his right, in a beige suit, Ramis, who Falzone introduces as a recently dubbed “Illinois State Landmark.” Ramis sits on his provided chair; Miller remains on his feet.

Mr. Ramis gives his opening statement first. It’s a quick and precise jab: “Does this film go too far? Not for me.” He calls “Happiness” “fascinating” and “twisted,” says it elicits “righteous indignation, which is one of my favorite feelings to get from a film.” Miller disagrees: his opening statement is longer and “Freudier,” his punch more of a hook. To say that there is anything to be taken from the film about the human condition for Miller is “to say that watching ‘The Texas Chainsaw Massacre’ is a good way to teach people how to safely use power tools.”

Ramis, both speaking and looking like an old professor, draws comparisons between the film and Voltaire’s “Candide,” which he says gives a similar “grisly picture of the way the world is.” But there’s no depth to “Happiness” for Miller: “The characters are, at the end, just as when we first met them.”

“Comedy is subjective,” Ramis responds. He’s being either forgetful or modest because his film “Groundhog Day” is objectively hilarious for anyone with a soul. “Discomfort is the source of comedy,” he says. “It’s also the source of discomfort,” Miller responds quickly, getting a laugh. The debate is mild: both men remain comfortable and respectful in their disagreement.

In an audience poll, most raise their hands in favor of the movie. “Oh, you’re all film students,” Falzone scoffs. “Who thinks it’s too offensive?” A few hands go up. “You’re all adults,” Falzone tells this group.

At the climax of “Happiness,” when a father/pedophile played by Dylan Baker describes the rape of his son’s friend as ‘great,’ there was a smattering of laughter from the crowd. Ramis says during the debate that the laughs came “from how disturbed we all are.” Miller agrees: “Laughter is a defense against something that is so abhorrent.” The debate, however, is less funny when they agree.

Dr. Miller calls attention to the film’s recurring theme of impotency and ponders out loud its possible origin. He suggests perhaps the screenwriter’s own life. Ramis, less concerned with Solondz’s sexual fortitude, searches for cinematic categorization. Like Charlie Kauffman’s “Synecdoche, New York,” Ramis says, “Happiness” taps into our “fascination with abomination.” Miller contrasts the film with “American Beauty,” which he felt “flowed very naturally” in ways “Happiness” did not. Ramis quips back, “Well, as a director, [Sam] Mendes is depressed; Todd [Solondz] is just sick.”

The fundamental disagreement is, understandably, a psychiatrist’s concerns versus a comedian’s gospel. Miller says, “When [Solondz] makes fun of pedophilia, that’s when it steps over the line.” “If we restricted comedy to what is politically correct,” Ramis responds, “we’d lose a lot of the comedy that’s out there.” (Andrew Rhoades)