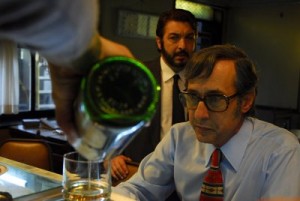 Buenos Aires has a timeless air, but that illusory sensation masks history. In “The Secret in their Eyes,” the 2009 Academy Award-winner for Best Foreign Language Film by writer-director-editor Juan José Campanella, a flashback-driven structure makes its characters’ histories both distinctly of their time but also embedded in memory.

A former Buenos Aires state court investigator, Benjamin Espósito (Ricardo Darin, “Nine Queens”) has just retired and to get some kind of perspective on his life, starts to write a novel about the memory from his career that most troubles him: the unsolved brutal murder of a young woman twenty-five years earlier, in 1974, in the months just before the dictatorship took over the country. Espósito is impressed by the devotion of the woman’s widowed husband, which mirrors his relationship with his superior, Irene Menéndez Hastings (Soledad Villamil): how far can fixation go, and last, if unrequited? In the husband’s case, it’s the separation enforced by death; in Benjamin and Irene’s, there are issues of class, of propriety, of simple shyness that keeps a dance of flirtation from becoming a tango toward commitment. The story, based on a novel by co-writer Eduardo Sacheri, shifts confidently back and forth in time, with surprises not only in plotting but in character development. Campanella’s work on U. S. television includes episodes of “Law & Order SVU,” which, while at a stylistic remove from the cinematic style of “Secret,” suggests the director’s range of storytelling skills. (His next project is an animated film based on… Foosball.)

Finding locations for the film’s dual periods must have been easy: while there are likely special markers for someone from Argentina to recognize the era, the streets and interiors look much the same today: it’s as if this story could be taking place at the table next to yours at a bar or a restaurant. This element becomes pitched in scenes where Espósito has to fetch his often-drunk investigative partner Sandoval (one of the country’s best-known comics, Guillermo Francella) from the corner bar: the lonely man lives his life in public, passionately. The sly Francella makes a raucous complement to Darin, whose eyes are wise and sad but not really self-pitying. A hero like him in an American movie might be rigid with nostalgia. Instead he moves forward, solves a crime, tells a story, wakes up to the dream in front of him. Why did he and Irene never become lovers instead of mere conspirators? The unwritten novel chimes with the life not lived.

As the investigation leads Espósito onto dangerous ground, Campanella echoes paranoid American movies from the 1970s: there’s a scene involving the murder suspect and Benjamin and Irene in an elevator that says everything about the balance of power, between the characters, and in Argentina at that moment, in a single shot. Pakula would have been proud.

But while Campanella captures the bruised ache of the couple’s contemporary relationship, the movie’s best passage comes between Espósito and Sandoval. Set in Sandoval’s favorite bar, in the lovingly talky film’s longest speech, the inebriate observer builds to a fever pitch about the idea of “passion”: What does it tell you about a man? He has to stand, to walk around, to shout, to explain himself. What was their suspect’s passion? What clues had he left? Soccer. Futbol. At its crescendo, Campanella cuts, in a movie that moves around the avenidas of Buenos Aires, to the sky, where cotton-candy clouds dance around the brilliantly lit perimeter of a soccer stadium at night. The perspective moves forward, into the stadium, into the game, moving from a God’s-eye view in a seemingly unbroken motion across seven or eight minutes into a medium-close shot of our two investigators looking in the huge, cheering throng for one man. It’s a thrill in a haystack.

Beyond all of the film’s finery and its refraction through the prism of darker chapters of Argentina’s history, beyond the fact that the streets of the city look much the same now, another element of timelessness sinks in. There’s romance, comedy, horror. There’s fear and love, there’s the fear of love. But over it all is the suggestion of a protected class, never prosecuted for crimes or the disappearances of adversaries. There’s a famous café the characters mention, “The Immortals.” The story is about murder and grieving and longing and loss between the characters on screen, but it is also a fable of an elemental conflict: what satisfactions, what passions, can be grasped, must be grasped, when ultimately there are things we are powerless to change, even if we think we have grasped their secrets.

“The Secret in Their Eyes” opens Friday at Landmark Century.