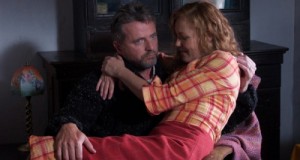 The Irish will always be with us, if you go by the clutch of  small Celtic tales on release this month in Chicago. Aidan Quinn plays a self-absorbed writer in the ghost story “The Eclipse,” which opened last week, and now in the period melodrama “A Shine of Rainbows,” he’s the reluctant, chilly stepfather of a stammering orphan. In a decade long before Ireland emerged into the modern world, on remote, picturesque Corrie Island Marie O’Donnell (Connie Nielsen) brings home little Tomás (John Bell), who’s captivated by this new world, even as the older Alec finds it hard to warm to the boy. The sights are savory, even as Bell fails to capture the necessary boyishness (and performance skills) to truly win you over. Alec’s reluctance to embrace the child seems a levelheaded reaction. Most notably, there are some worthy observations about the condition of shyness in the characters’ behavior. There are distant echoes of John Sayles’ “The Secret of Roan Inish,” especially in the invocation of local lore with seals and their secrets. Director-co-writer Vic Sarin is shameless, but in a well-intentioned way, if you like a little Celtic sentimentality. The rainbow motif? Let’s keep it to ourselves. Best wept over a jar of whiskey. With Jack Gleeson, Karl O’Neill, Niamh Shaw, John Bell, Fionn O’Shea, Joy McBrinn, Kieran Lagan. 101m. (Ray Pride)