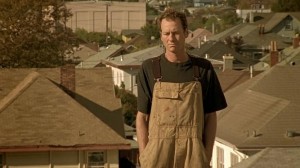 Cinematographer-turned-director Frazer Bradshaw’s “Everything Strange And New” captures the airlessness of one man’s life, largely in visual terms, partly in sound. The everyday life of a fortyish carpenter named Wayne is a mosaic of messes: children underfoot, wife troubled, drinking with a new drinking buddy beckons. The plain title blurts Bradshaw’s ambition. (Does the banal, observed, ineffably reveal?) Despite Wayne’s agitated state, Bradshaw works with intent formal control, and likes the word “pastoral” to describe the film’s tableau-driven mood. (He’s also described the film as “a portrait of passivity inside a vortex of change”; the film’s haunted-California imagery is often crystalline where lingo like that isn’t.) Emotions rise. Sexual conflicts emerge. A clean resolution’s not likely. Plus: Clowns are invoked. (Literal ones.) A Sundance 2009 entry. With Jerry McDaniel, Beth Lisick, Rigo Chacon Jr., Luis Saguar. (“Everything Strange And New” was one of the five nominees for the IFP and MOMA’s “Best Film Not Playing at a Theater Near You, 2009”; I was on the jury.) 84m. (Ray Pride)

“Everything Strange and New” opens Friday at Facets.