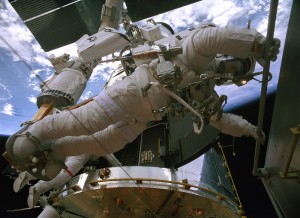 IMAX 3D form and content align in “Hubble 3D.” The universe fills the big screen, as well as the intervening volume of the theater, for spectators wearing lightweight, outsized 3D glasses. This exceptional travelogue recalls the phantom-ride films dating from 1897, which were made with the point of view of a motion picture camera placed on the front of an unseen moving train. This 2010 ride is a visionary traverse of trackless space via imagery harvested by the Hubble telescope’s Wide Field Camera, Cosmic Origins Spectrograph, Advanced Survey Camera and Imaging Spectrograph, as repaired and recalibrated by the Atlantis STS-125 crew. Those technicians got eight months of instruction in cinematography so they could operate the 700-pound IMAX 3D camera loaded with just eight minutes of raw film. Footage of maneuvers in orbit and five spacewalks is supplemented with ordinary digital video shot inside the spacecraft. Director-writer-editor Toni Myers (“Space Station 3D “), whose producing credits include “Deep Sea 3D” and “Under the Sea 3D,” thankfully limits the human-scale material to pre-launch boot-lacing, weightless banter and the rewards of hard work. “Success at last!” cheers offscreen narrator Leonardo DiCaprio, who lent onscreen narration to “The 11th Hour” (2007). This sets up a spectacular exercise in astrophysical scale as a virtual moving lens travels very, very, very far. Think of a fact-based version of the trippy nine-minute Stargate sequence in Stanley Kubrick’s “2001: A Space Odyssey” (1969). Myers’ script anthropomorphizes the origins of cosmological objects with such terms as “newborn,” “infant,” “nursery,” “cocoon” and “tadpoles.” The narration also personifies the ten-year-old space telescope as an “eye” and an interlocutor: “Hubble asks where did we come from? Where did the universe come from?” Godless and G-rated, “Hubble 3D” cites the constellation of Orion’s Belt without asking who created or outfitted Orion. The nine-minute “Powers of Ten: A Film Dealing with the Relative Size of Things in the Universe and the Effect of Adding Another Zero” (1977), made for IBM by Charles and Ray Eames, visualized distances measured with the exponents ranging from twenty four to minus sixteen. Al Jarnow’s two-minute PBS animation “Cosmic Clock” (1979) accelerated one billion years into the future. “Hubble 3D” outstrips both those films by orders of magnitude. All that’s missing is how digital technicians translated Hubble’s raw data into 70mm vistas that stupefy so fantastically. 43m. (Bill Stamets)