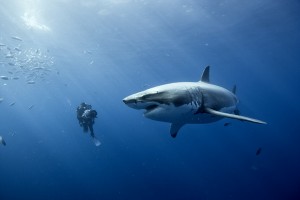 Anchored to Earth Day, “Oceans” is far inferior to  upcoming nature features “Hubble 3D,” a space-techno travelogue opening two days later, and “Babies,” a cute study of animal behavior opening on Mother’s Day. Directors Jacques Perrin and Jacques Cluzaud, who share writing credits with four others, earlier made the marvelous “Winged Migration” (2001). The version of  “Oceans” screened for reviewers opens with Demi Lovato and Joe Jonas recording the song “Make A Wave.” Through the supposed studio window, you can see a nearby ocean. The duo makes a pitch: if you go see “Oceans” on its first weekend, Disneynature promises to make a pro-ocean donation. Then some young kids run to a sand dune. A thoughtful lad looks out at an unnamed ocean. Narrator Pierce Brosnan tells us what he’s thinking: “What exactly is the ocean?” “Oceans” isn’t into exactitude. The number of oceans on the planet is not given. Tides, salinity and where waves come from are not exactly of interest. To figure out where parts of “Oceans” were shot, check the end credits that list shooting permits around the world. This G-rated documentary consists of brief uninformative, if occasionally cool, scenes in near-random sequences. Among the baffling transitions: from sea life trapped in the nets of fishermen of no particular nationality, to giant waves smashing into a lighthouse, a wall for beachfront property and various seagoing vessels. The oceans fight back, states Brosnan. At the end, we come back to the boy on the beach. “So instead of asking what exactly is the ocean, maybe we should be asking who exactly are we,” suggests Brosnan. “Oceans” may tell us we are a species that watches movies. Unlike the Dugong, Bigeye trevally and Asian sheepshead wrasse that are preoccupied with eating and evading other sea critters. I don’t buy the filmmakers’ claim that “No animals were harmed during the making of this film.” Every other shot or so, we clearly see one of them gulping down another one of them. 87m. (Bill Stamets)