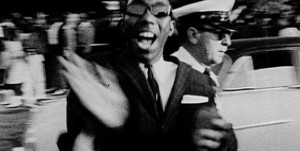 Bill Guttentag and Dan Sturman’s Oscar-nominated documentary, “Soundtrack for a Revolution,” takes a simple, if freighted notion, and runs with it: take the essential music of the civil rights movement and have it performed by an assembly of contemporary artists whose work is built upon the freedoms granted through the efforts of the figures of that era. There are reasons why songs like “Will the Circle Be Unbroken” are cultural refrains, and as sung by the likes of Richie Havens, they haunt. Guttentag and Sturman alternate with archival footage and interview segments, an oral history that delves into subjects like the Freedom Riders, the march on Washington, the murder of activists in Mississippi and the efforts of Martin Luther King. It’s a well-intentioned attempt to delving into both wellsprings of emotion: historical fact and musical hope. From the makers of “Nanking.” With The Roots, John Legend, Harry Belafonte, Wyclef Jean, Joss Stone, Richie Havens, Anthony Hamilton, The Blind Boys of Alabama, Mary Mary, T.V. On The Radio. 82m. (Ray Pride)