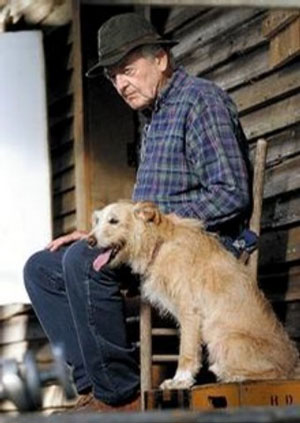 Among the treasures embedded in Sean Penn’s “Into the Wild” is Hal Holbrook’s autumnal grace as a man near the end of his life crossing paths with a young man seemingly at the start of his manhood. It’s heartbreaking in so many ways. In Scott Teems’ “That Evening Sun,” aching to be Faulknerian, Holbrook is Abner Meacham, the center the rest of the film revolves around, an 80-year-old man who breaks from the bondage of assisted living to die on what was once his Tennesse homestead. A poor white drunk lives there now with his wife and teenage daughter, and is ready to buy it from Meacham’s greedy son. Conflict ensues; the blood of sharecroppers past runs through Teems’ telling, beginning with Meacham’s dispatch to what had once been the workers’ shack on the property. Teems gives Holbrook the space to let Meacham breathe in his dignity. His performance as a winded but still upright reprobate is a memorable Southern archetype. He drawls and rasps like bone incarnate. The story, not so much. With Ray McKinnon, Walton Goggins, Mia Wasikowska, Carrie Preston, Barry Corbin, Dixie Carter, Barlow Jacobs, Anthony Reynolds, Bruce McKinnon. 110m. (Ray Pride)