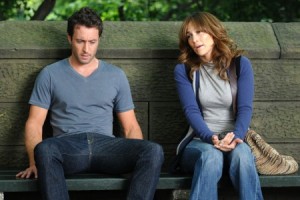 We meet Zoe (Jennifer Lopez) about the time her zygote forms, thanks to sperm donor CRM-1014. She’s waited long enough for a full-fledged mate. Then she meets Stan (Alex O’Loughlin) in a trademark New York meet-cute in the backseat of a taxi. Let the groans begin. Long before her water breaks and twins are born, this romantic comedy for breeders proves unbearable. It starts with the opening credits: a cartoony makeover of the cityscape with baby-centric motifs on street signs, store windows and sidewalk vendor stands. Stephen Trask’s score inflicts cues to underline and highlight every single trivial feeling. TV producer-director Alan Poul directs, and TV producer-writer Kate Angelo writes. Neither bring any knack for character-building or story-pacing from the small screen to this second big-screen release from CBS Films (after the Harrison Ford medical melodrama “Extraordinary Measures”).  The plot unites Zoe, proprietor of a Greenwich Village pet shop, and Stan, an upstate goat-cheese maker who peddles his organic line at the Tribeca Farmers Market. They each have tiny uninteresting issues about relationships in their pasts that go away in time for postpartum nuptials. Her disabled Boston Terrier with a two-wheel harness for his back legs is good for stupid reaction shots. Another supporting character is a McDonald’s McFlurry that Stan holds up between his face and Zoe’s face when they’re in bed together. There’s an eyecatching consistency in its positioning throughout three or four shots. In this production by Escape Artists, even the SUV Zoe drives is a Ford Escape. “Out of Sight” (1998) and even “Gigli” (2003) equipped Lopez with screen partners emanating far more spark, though neither George Clooney nor Ben Affleck could match the tanned, defined chest of tractor-driving Stan. With Robert Klein, Michaela Watkins, Melissa McCarthy, Eric Christian Olsen, Noureen DeWulf, Linda Lavin, Anthony Anderson, Maribeth Monroe. 106m. (Bill Stamets)