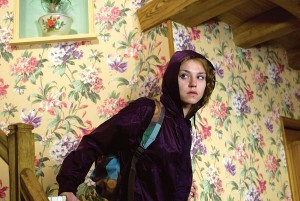 In French master André Téchiné’s best movies across his three decades of work as a writer and director, like “Witnesses” (2007), “Thieves” (1996) and especially “My Favorite Season”  (1993) and “Wild Reeds” (1994), he captures the dynamics of moments between characters with an astuteness of camera placement and cutting that can take the breath away. This is what it is to be in the room with these figures, to watch them observantly. “The Girl on the Train,” at its most successful, is as good as those great films. Jeanne (Émilie Dequenne, “Rosetta”) is a 21-year-old who half-heartedly searches for work between hours rollerblading through Paris, leaving her and her widowed mother (Catherine Deneuve) at odds. Jeanne swooping to Bob Dylan’s “Lay Lady Lay” with her ratty bottle-gold tangle of curls in the sun along the Seine, is just the kind of unlikely juxtaposition that brings blood and mood to the filmmaking, even when the actions of Jeanne, a gentile, faking an anti-Semitic incident remain obscure. It’s based on a 2004 incident in France and seeking productive symbolism here seems futile. Dequenne is a fierce, magnetic performer, productively set against Deneuve’s customary glaciations. (The original title, “La fille du RER,” refers to the Résau Express Régional, trains that connect the suburbs to Paris.) With Nicolas Duvauchelle, Michel Blanc, David Barbas, Ronit Elkabetz, Mathieu Demy. The song choices and score are terrific throughout; the Philippe Sarde music cue under the opening credits is euphoric and annunciatory, a rush of light and dark and… bagpipes? 105m. (Ray Pride)

“The Girl on the Train” opens Friday at the Music Box.