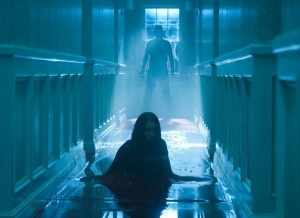 What Wes Craven wrought is wrought once more. A glistening variation on the eight movie versions that came before it, “A Nightmare on Elm Street”‘s ninth life, partly shot on Chicago locations, is pretty to a fault. Which may or may not be appropriate to a now decades-long saga about the revenge of a murdered child molester against the children of his killers. Another remake from Michael Bay’s Platinum Dunes production company, this “Nightmare” is directed by Samuel Bayer, a fifteen-year veteran of commercials and rock video, including several for Green Day and the smoke-saturated “Smells Like Teen Spirit” for Nirvana, which features a creepy janitor not quite in the league of the estimable Mr. Krueger. In Springwood, Ohio, a small town of a hundred nights and a night, Freddy’s teenage victims, female and male, are relentlessly pretty, with the men’s hair all boy-band tousle, manicure and lacquer. Night comes and comes again. “If I sleep, I dream, if I dream, I’m dead,” is a most pointed line of dialogue. The costume designer works overtime, from the most medicated of the youths wearing a Joy Division t-shirt, to the layers of costumes for the women, artful stages of dishabille baring vulnerable shoulders, that also includes footwear that leads to peril while barefoot. Stings of music are orchestrated for pots and anvil, but some of the sound design is sweetly sneaky, such as the distant rustle of finger blades blending into glassy wind chimes. Jackie Earle Haley’s performance is mostly beneath creature makeup with his voice transformed into raspy ADR like a latter-day Darth Vader. Moving quickly from setpiece to setpiece, Bayer, working with a screenplay from Wesley Strick (“Cape Fear”) and Eric Heisserer (the upcoming remake of “The Thing”), doesn’t fuss with exposition, instead layering the imagery with arty yet artful mutations, with gentle dashes of Goya akin to “The Sleep of Reason.” More on point is a young artist’s wall papered with her haunted drawings and predecessors like Van Gogh, seen in a self-portrait, and Goya’s “Saturn Devouring One Of His Children.” It’s a biting footnote. There’s a serene arbitrariness to the events that lead to the serial flaying and slaying of Freddie’s victims, which diminishes the film’s cumulative power, the hallucinations lacking the thematic unity of a film like “Eternal Sunshine of The Spotless Mind.” But there are pleasures, including Rooney Mara as the outsider heroine, a marble-mouthed mutterer of artistic determination. Also: a plush pre-dawn blue seems Bayer’s favorite color, reminiscent, as is some of the lighting design, of the dramatic tableaux of Gregory Crewdson. And a waking nightmare that alternates pursuit in the aisles of a pharmacy with filthy boiler-room tunnels nods toward German photography: the blandly satiric consumerist expanses of Andreas Gursky and the industrial typologies of Bernd and Hilla Becher. Muzak in the form of the theme from “A Man And A Woman” and the Everly Brothers singing “Dream” is ticklishly funny. 102m. Anamorphic 2.40 widescreen. (Ray Pride)