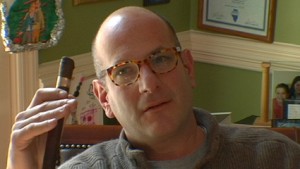 Local filmmaker James Allen Smith’s debut feature documentary, “Floored,” debuted at the Siskel Film Center in January, and was a record-breaking attraction. Whether the audiences for this run are also drawn from the Chicago commodities milieu, the film will still play as elegy. Louder-than-life figures give way to a requiem about the demise and demolishing of a Chicago, generational, blue collar, money-spinning industry. The pits were a way up for generations of the Chicago working class. Computerized trading that has winnowed the population of the pits to ten percent of what it once was. “A baschun of capitalism,” a subject calls it. “There are cliques, Jewish, Irish, Italian cliques. I’m Polish. I don’t think we have a clique.” Another: “We lose open outcry, we’ve lost an institution!” It’s a Chicago story, and ripe for dramatic adaptation: surely there are generations of stories left on the hard drives in the edit-room bay. (Ray Pride)

“Floored” opens Friday at Siskel. The film’s website is here.