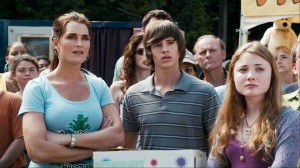 The critters are anti-settler in this awful family comedy. A guerilla-style squirrel leads the insurrection against the bogus “green” development called Rocky Springs. For his first act of resistance, he triggers a woodsy IED that knocks a developer in his SUV off the road and over a cliff. Set in Oregon and shot in Massachusetts, “Furry Vengeance” comes with a potentially cute premise. Cuddly monkeywrenchers vocalize their communiques. Instead of subtitles to translate these chirps and yelps, thought-balloons with film clips inside visualize the messages for us. Excerpts from “Braveheart” will signal the climactic defense of homeland by the indigenous hawk, fox, bear, otters, skunks, turkeys and poop-bombing birds. Usually at the receiving end of the environmental pushback is Dan (a flabby Brendan Fraser). He’s the on-site construction supervisor who brought his wife (Brooke Shields) and 15-year-old son (Matt Prokop) from Chicago. Roger Kumble (“Cruel Intentions,” “Just Friends”) directs a screenplay by Michael Carnes and Josh Gilbert that shows none of the bite of that duo’s nasty “Mr. Woodcock.” Dan’s license plate reads “DIE 9317,” he exclaims “Miley Cyrus!” as a curse, and his lying boss is named “Neal Lyman.” The interspecies slapstick is painfully unfunny, including Dan’s three hits to the groin. This slipshod U.S.–United Arab Emirates coproduction employs the cinematographer from “Alvin and The Chipmunks” and editor of “Are We There Yet?” During the end credits, the cast spoofs music videos. The stretch for laughs continues after the film’s copyright notice with some free-floating cartoony voices. With Ricky Garcia, Eugene Cordero, Patrice O’Neal, Jim Norton, Skyler Samuels, Wallace Shawn. 92m. (Bill Stamets)