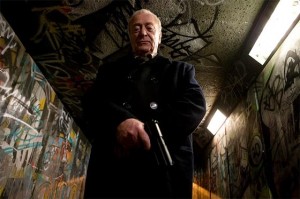 Living out his late years in a council estate in the dank outskirts of modern-day London, Harry Brown’s days are streaked with rain, colored not with nostalgia but hues of gunmetal and grease. Daniel Barber’s unexpectedly affecting “Harry Brown” pits a retired marine (Michael Caine) against the violent, drug-dealing sociopaths in hoodies who terrorize the local residents. After the murder of one of Harry’s best friends, he descends into fantasies of retribution which he quickly and surely enacts. It’s a stunningly photographed nightmare, surely influenced by Polish filmmakers like Kieslowski or the lighting in Hungarian films like Lajos Koltai’s in the neon-slashed, slime-streaked “Time Stands Still.” (Cinematographer Martin Ruhe is best known for the brilliant monochrome of Anton Corbijn’s Ian Curtis biopic, “Control.”) Caine’s performance is precise and plausible. Yet Gary Young’s script goes beyond cynicism and despair into something approaching hate. Youth is not only to be feared, but loathed. Authority is seen as more corrupt than in the bleak, yet more poetic “Red Riding Trilogy” and the future is guaranteed only by spilling the blood of generations. An invocation of the Troubles in Ireland is also contentious. Clint Eastwood’s septuagenarian in “Gran Torino” knew forgiveness: Harry Brown lives to kill. Emily Mortimer’s performance as an insightful but impolitic police investigator is a study in twitchy telegraphese. The filmmakers’ skill is at odds with their politics. Matthew Vaughn, director of “Kick-Ass,” is one of the film’s producers. With Iain Glen, Liam Cunningham, Jack O’Connell. 103m. (Ray Pride)