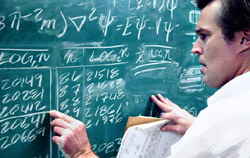 Zach LeBeau’s very modest yet philosophically ambitious “The Scientist” stars Hal Hartley stalwart Bill Sage as the titular physicist, who’s grieving over lost loved ones and constructing some sort of generation to channel psychic energy. It’s a swell vehicle for Sage’s brand of conflicted charm, but the film is neither “2001” or “Solaris,” which the filmmaker has said he admires, nor “Pi” nor “Primer,” intellectually ambitious films made on a half-a-hand-me-down-shoestring. The other performances are erratic. A scene with the wind rustling crisply in trees made me long for summer to come. In a director’s statement, LeBeau talks an admirable game: “We can draw from so many cultures, so much history, so much pain and anguish and beauty and wonderment and put all of that cumulative experience and knowledge together to do something great together, as a people, to take our consciousness en masse to a higher level.” With Brittany Benjamin.  88m. (Ray Pride)

“The Scientist” opens Friday at Facets. LeBeau will appear at screenings Friday,  Saturday and at Sunday’s 3pm, 5pm and 7pm shows.