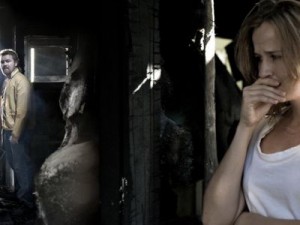 Bag of cash. Leave it be. Hundreds and thousands of dollars in a bag? Walk away. You can tell characters in most movies don’t watch movies: they repeat all the splendidly entertaining cock-ups of decades of the avaricious and doomed on-screen. A lovingly constructed neo-noir, “The Square” is the feature debut of Australian stuntman-turned-director Nash Edgerton and his brother Joel, who co-writes and plays what may be the story’s only honorable man. What if you could get away with murder and got away with it repeatedly, no matter what fate threw your way? That’s the underlying tragedy that befalls Raymond Yale (David Roberts, face increasingly drawn with worry and despair), a middle-aged contractor in an affair with a younger woman, Carla, who convinces him that her criminal husband’s ill-gotten gains will pay their way into a better life. As brackish as anything by James M. Cain (“The Postman Always Rings Twice”), the story’s turns from theft to arson to accidental death to murder to blackmail to… Edgerton is a tremendously talented filmmaker, as his earlier shorts also demonstrated, a crack hand at editing and utterly unsentimental about the fates of his characters. Think of the last shot of the Coen brothers’ “A Serious Man”: the implacability of fate is measured out in every wrong move the characters make in “The Square” and the sudden retribution that follows; it’s like a Roadrunner cartoon played out as brutal, dank drama. (Remember, if someone invokes sharks in the river, the shark will likely make an appearance right after you’ve forgotten its mention.) Plans are never simple. Lovers are doomed. Fate’s a cruel fucker. I loved every dank, sweaty minute. “The Square” is preceded by Edgerton’s 2007 short “Spider,” which has been on YouTube for ages, but makes for a sardonic eyeful on the big screen. It’s a perfect taster for the film to come, and one of its characters even makes an unexpected appearance in the feature. 105m. (Ray Pride)

“The Square” opens Friday at the Music Box and Evanston CineArts.