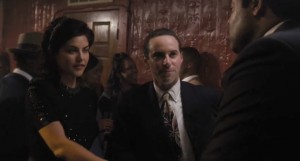 Very much like “Cadillac Records” (2008), “Who Do You Love” dramatizes the business plan of Leonard and Phil Chess, Polish Jewish brothers who run a South Side Chicago club, record blues musicians, sell race records and then go national with cross-over rock ‘n’ roll. The earlier film cast bigger names–Adrien Brody, Jeffrey Wright, Mos Def and Beyoncé–and devoted more time to the personal and professional lives of the black artists. Written by Peter Wortmann and Bob Conte, and directed by Jerry Zaks (a lot of Broadway and “Marvin’s Room”), “Who Do You Love” is more about the Chess brothers, and more about Leonard (Alessandro Nivola) than Phil (Jon Abrahams). The title pertains more to Leonard’s competing loves– his wife, business, black music and his black mistresses–than to the Bo Diddley song “Who Do You Love?” he recorded in 1956. Zaks starts in the wings of a 1955 Bo Diddley (Robert Randolph) concert in Brooklyn, then goes back to 1933 Chicago when little Leonard picks up the usage of “motherfucker” from an old black guitarist in the street. Next it’s 1946 and the Chess brothers get out of their dad’s junk business. They buy a club in 1947. A recording studio follows. Blues move on the black market, but rock explodes. The film seems motivated to educate about race, youth culture, AM radio and exploitation. Sometimes the drama is relegated to the screen equivalent of a record’s b-side. With Robert Randolph, Keb’ Mo’, David Oyelowo, Chi McBride, Megalyn Ann Echikunwoke and Marika Dominczyk. 92m. (Bill Stamets)

“Who Do You Love?” opens Friday at Landmark Century. Marshall and Terry Chess, sons of Chess Records founders Leonard and Phil, will introduce the 7:15pm show Friday, April 30th.