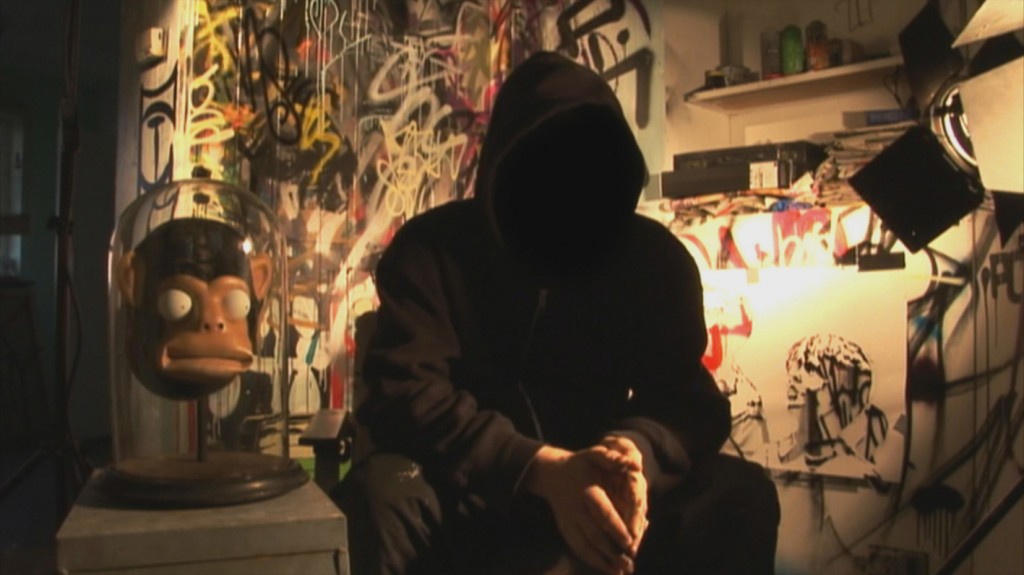 There’s no one-size-fits-all definition of modern-day documentary, but I’m partial to “stranger than fiction.”

And then there’s “too true to be good.” The highest per-screen average of any movie in the U.S. this past weekend was the anonymous but conceptually gifted street artist Banksy’s “Exit Through The Gift Shop,” an oft-riotous entertainment about perception and value in the art marketplace. Essentially self-distributed, “Exit” purports to be the story of the artist turning the camera on a would-be documentarian. While narrated by Rhys Ifans, a faceless figure in a black hoodie is identified as Banksy, with a distorted voice and an immaculate sense of comic timing. With pudgy English fingers and a bandaged middle one, Banksy turns his hands over and over as he outlines the game.

“It’s the story of what happened when this guy tried to make a documentary about me but he was actually more interesting than I am, so… now the film is kind of about him.” The wannabe is a Frenchman named Thierry Guetta, a vintage store owner in what Banksy dryly dubs Los Angeles’ “most Bohemian shopping district.” The lamb-chopped Guetta, resembling an unholy splice of Ron Jeremy and Rob Schneider, becomes obsessed with chronicling street art and shoots hours and hours of video following artists like Shepard Fairey in the wild. (Fairey, one would assume, is an accomplice to the making of this film without a directorial credit.) In a terrifying image for anyone who’s shot video, dozens upon dozens upon hundreds upon hundreds of unlabeled Hi-8 and Mini-DV cassettes are revealed, stacked and shelved in Tupperware shoe boxes. In latter-day footage, after Guetta has purportedly been coaxed into becoming a street artist himself under the nom de wheat paste of “Mister Brainwash” and prepares for a frighteningly overambitious debut, touted with an LA Weekly cover story, he starts to resemble a middle-aged Rainer Werner Fassbinder, yet with much, much less talent. The satire grows as high as a surveillance camera’s eye. The art we see is a terror of terrible, Mr. Brainwash as the Roland Emmerich of overscaled art fraud. He thinks big and explosive. Naturally, the show turns out to be a hit with the cognoscenti.

There are any number of glaring implausibilities that make what Banksy has described as the “world’s first Street Art disaster movie” almost necessarily a fabrication. (Watching the film, they’re pretty easy to spot and readily forgiven.) Still, to have created this whole cloth would require a magnitude of genius, including the patience to have shot raw material over a ten-year period. Considered as a documentary about pranks, put-ons and cultural provocation, as performance art about performance art, it’s more “documentary” than at least Sacha Baron Cohen’s post-“Candid Camera” stunts. (Still, I would admire any movie rife with sly lines like “Shepard Fairey was at Kinko’s on Vine.”)

Some of the best documentaries are shaped in the editing room, and the helium-high comic highs of “Exit” are in large part due the stupendous, fluid, fluent, nourishing work of talented editors (Chris King, Tom Fulford, holy shit!). The film opens with the rattle of propellant balls in a spray can and “A Banksy Film” sliced in half, and then to Richard Hawley’s dour but anthemic “Tonight, The Streets are Ours,” a rapid-fire selection of street art being plastered around the world rushes past. It’s breathless, thrilling, ridiculous, funny, inspiring, crazed, a brisk whiff of forbidden chemicals. (The lyrics “don’t let fear” resound under a shot of an artist hundreds of feet off the ground on the side of a building in the middle of the night.) Alone, it’s one of the best short pieces of work released this year, and the producers put it on YouTube.

But if it’s all too good to be true, does it matter? “Exit” doesn’t have the ambition of Orson Welles’ “F for Fake,” but Welles and Banksy have different satirical aims in their massaging of the art marketplace. And to see footage of fantastic, conceptual work of various artists, including Banksy’s own defacing of the cement walls of Gaza with stencils of a girl rising into the air on the tether of a single balloon, would elevate many a lesser film.

“It’s not ‘Gone With The Wind,’ but there may be a moral in there somewhere,” Banksy says with a verbal shrug. Can anyone be an artist? Can anyone be a fraud? Can the wealthy take control of the means of production and distribution? All worthy questions that light up inside the pinball machine that is “Exit Through The Gift Shop.” Even when the film veers into its most prankish removes, it’s stellar entertainment.

“Exit Through The Gift Shop” opens Friday at Landmark Century. Banksy will not appear. The five-minute credit sequence is embedded below.

1 Comment
Inline Feedbacks
View all comments
Take it to the Banksy: The art of disappearing in public | Newcity … | Artist News