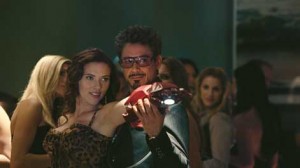 “Iron Man 2” is the hearth-warming equivalent of Canada’s not-so-secret comfort food, poutine: fries with melted cheese topped with gravy. With maybe some extra gravy on the side. And are you going to finish those fries? O Canada! O Tony Stark! Director Jon Favreau repeats capably from the original, working from a script credited to Justin Theroux (“Dedication,” “Tropic Thunder”), with deft camerawork from Matthew Libatique, whose CV as cinematographer ranges from “Pi” to “Phone Booth,” from “Tigerland” to “Josie and The Pussycats”: this is an efficiently good-looking picture. Of course the star is Robert Downey, Jr., whose greedy knack for scene stealing is tempered, less manic Hamlet than Ham and “hot damn!” on wry. (“Oh, it’s good to be back” is his first line.) The riffs run from gaga to dada in this lightly satirical take on what the script calls “the military industrial age.” It’s a buffet of goofiness, as well as a wild rumpus: it’s an id’s movie suited for this moment. The established marks are hit, perforated. Take one notion from the opening: Iron Man’s rocketing fall from a sky bursting with fireworks, hoping to land on the most precise marks in front of a crowd of rowdies, isn’t that an ideal objective correlative to the innards of Robert Downey, Jr.’s essence? Among the cast, Mickey Rourke, a grimy, prison-tattooed Russian physicist-nemesis is eastern promises but no compromises on his deadpan idea of humorlessness, he’s a Method madman grunting and showboating. The sometimes-charming Sam Rockwell is overmatched by others in the cast, his overly energetic competing munitions manufacturer making with the sweat. Sam Jackson wrangles mouthfuls of superiority and a Furyous eye patch. Scarlett Johansson impresses like a creature of the catwalk: posture and pose. She’s an odalisque in a shaped black cocktail dress, at least until she’s animated into a “Mission Impossible”-style multi-baddie beat-down: still, Favreau features her face; even in kinetic play, he’s all about centering her voluptuous, louche mask of a va-va-visage in the frame. Appropriately, Garry Shandling plays an adversarial Senator with his usual dickish felicity. Consider Gwyneth Paltrow present. “Iron Man 2” is cool beans: reviewers will give away too much of the reflexively offhand wit. Stay through the credits for a bumptious “button” alluding to the next Marvel Studios production. (Ray Pride)