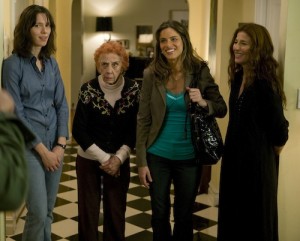 A brilliant if skittishly despairing comedy with glimmers of hope and kindness, Nicole Holofcener’s fourth feature, “Please Give,” is easily her best.

In modern-day Manhattan, a few moments ago, Kate (Catherine Keener) and Alex (Oliver Platt) run a tasteful furniture store stocked through buys at estate sales. Kate worries her teenage daughter Abby (Sarah Steele) is becoming materialistic while Abby is furious with acne. The couple have bought the apartment of their 92-year-old neighbor Andra (Ann Guilbert), but it’s the oldest of her granddaughters who look after her, Mary (Amanda Peet), who seems most ready for her to croak, while a younger granddaughter Rebecca (Rebecca Hall), an x-ray technician who performs mammograms and, while tall, lithe and lovely, has little drive in her life. For a ninety-minute movie, “Please Give” packs in all kinds of conflict and comedy that would take, well, ninety minutes to describe. As Holofcener’s customary alter ego, Keener’s Kate is riddled with all manner of guilt and doubt and more guilt. Disparate measures of empathy define each character. So far, so female. But there’s none of the expected uplift.

Holofcener mutinies: her characters are dastards, stuck in their dastardly daily routine, but also in their conception of themselves. In general, the rigid presumes itself pliant: these characters don’t change, but as a writer and director, she allows them moments, privileged moments, sometimes only instants, really, such as when Peet’s Mary steals momentary refuge on her sister’s ready, unresisting shoulder. Holofcener’s calibration is exacting and momentarily elusive. But behavior recurs. She works as if she’s weaving a cat’s cradle rather than sturdy, expected structure.

I spoke to Holofcener a couple of weeks ago, but the interview went awry, a less interesting study in discomfort than her fistful of features. I tried to shape anecdotes that would demonstrate how many elements from my personal experience—knowing shopowners who buy from estate sales, meeting a cheery ancient woman in China whose land had been sold years earlier—were parallel yet amplified by her gift for observation, Holofcener offering the occasional irritated swipe. (She took a bite at the questions scrawled across my notebook pages.)  Her work is more bountiful than the conversation, my fault for wanting to say, this film is really, really good, but, unlike one of her characters, not blurting. (I did learn that one rejected title was the jaunty “Feelin’ Guilty.”) There is a customary caution to screenwriters not to allow dialogue to be “on the nose,” not to be direct, but Peet’s delivery of the line concluding an unsatisfactory affair, “I don’t want to fuck you anymore,” is malefic splendor.

Holofcener’s dramatic cadences are sneaky, snaky, seeming aimlessness composed with uncanny cumulative power. Any allusion to Chekhov is likely to blow up in your face by the end of a review, but Andra’s pugnacious refusal of epiphany, turning her back to the autumnal turn of leaves in upstate New York, is wistful in a way reminiscent of “Three Sisters,” when the dream of someday getting to Moscow is finally put to rest. A blatant metaphor is turning red and yellow in our faces, yet Holofcener paces it. It’s not only a tidy refusal to face imminent mortality from a “menopausal-orange”-haired woman, but a mix of unspoken sentiment and sentience from the quartet of characters, the scent of the Adirondacks, the simple stutter of a startled intake of breath. Andra moves like a beat-down, dazed spaniel, but one that can still take a bite out of your ankle.

Although she’s not in the scene, it redounds to Peet’s Mary as well, as perma-tan as a venal Congressperson: crisp, crushable like a dry leaf. The confrontation between Mary and an ex’s current girlfriend on a New York side street is exemplary performance: posture, eyes, her fixed expression and somehow, without directly expressing it, the crumpling of the character’s consistently defensive self-delusion. As a writer of dialogue, Holofcener has a gift for wreaking unlikely commonplaces, phrases with music like Alex’s remark after leaving a nice restaurant: “I don’t know if that place is as good as we think it is, you know what I mean?”

There are jokes that should be discovered, not repeated. Holofcener is unflinching. For that, her characters become human. The ending is simple, elemental, finite, yet bursting with mystery. In a pricey shop, Kate makes an offering to her daughter as her husband observes. Abby is radiant and lovely and loved. Keener’s empathetic gift has never seemed so quiet. The words “You’re welcome” are quiet, rote, likely unheard, and yet as grave as war, as daze-making as spring.

“Little by little, and also in great leaps,” Pablo Neruda wrote in the poem “October Fullness,” “life happened to me/and how insignificant this business is.” The second time I saw “Please Give,” the ending’s methodical choices of point-of-view suddenly cracked like lightning, yet smelled of the perfume of dried tears and the moist reaches of a child’s fresh-cracked smile. A mother, a father, a daughter, are momentarily pleased and a well-fashioned world finds closure. The sudden sentiment is genuine; sublime.