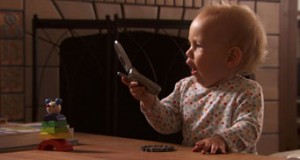 “Babies” glimpses the first year in the lives of three girls and one boy: Bayarjargal, from Mongolia; Ponijao, from Namibia; Mari, from Tokyo; and Hattie, from San Francisco. Director Thomas Balmes works without narration or much context: the explorations of the children, observed from middle distance by a single camera, usually on a tripod, comprise the film’s brief running time. If it were a Lumière film, it would be “Babies Entering A Life.” A feat of production management and editing, “Babies” grows increasingly sly in its cross-cutting across cultures, with the privileged “thirtysomething”-like San Francisco parents notably singled out for mockery for their teeth-clenchingly twee behavior in contrast to the ruder climes of Africa and Mongolia. Bearded hipster dad’s range of designer casual wear seems too good to be true. The camera fixes on one couple’s ugly feet to contrast with their newborn’s soft skin. Ponijao’s gleeful tongue-kisses of the family’s whimpering Basenji dog stands in stark comic relief. (There’s one orally fixated little child.) Nursing fetishists will find intermittent gratification; the MPAA’s explanation for the film’s PG rating is “for cultural and maternal nudity,” and there is bountiful, uninhibited pissing as well. The cumulative impact of “Babies” is less whimsical than the trailer for the film. The final shot is simply great; under the end credits, the filmmakers check in with the children two years later. Co-editor Craig McKay is a perennial collaborator of Jonathan Demme, including on “Silence of the Lambs”; “Reds” is among his other credits. Like an earlier project from French filmmakers, “Babies” could well be a worldwide hit. Think “March of the Zygotes.” Or maybe “Lost in Gestation”? Moral: we are all fascinating insects and must replenish the anthill immediately, with vigor and French lullabies. Ladies, start your biological clocks! The poppy music for this pop confection is by Bruno Coulais (“Coraline,” “Secret of the Kells”). 79m. (Ray Pride)

“Babies” opens Friday at Landmark Century and other locations.