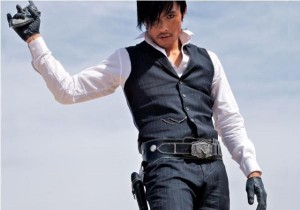 “The Good, The Bad, The Weird” revolves around a treasure map, and while it’s not “National Treasure,” it’s a modest little bit of an international treasure, a mashup from all across many maps. South Korea has been a goldmine of strange, aberrant and delightful movies since the 1990s, with a wealth of gangsters tales, and other genre-benders that range from the Rohmer-meets-Woody Allen comedies of failed romance by Hong Sang-Soo, to the acutely political thrillers of Bong Jun-hoo, like “Memories of Murder” and “The Host,” which combine Hollywood-level visual intelligence with knockabout wit and class consciousness. You could list half-a-dozen other contemporary Korean directors worth searching out, but it’s gratifying when any of their movies see the light of a movie-house screen, especially one as good, and indeed, weird, as this variation on Sergio Leone’s “The Good, The Bad and the Ugly.” Kim Jee-Woon’s stir-fried Western, his sixth feature, is an ultra-ambitious horse opera, the country’s most expensive film to date, shot in China’s Gobi Desert with a reported budget of $17 million. An epic set in 1930s Mongolia as the Korean peninsula is in Japanese hands, it’s as adept at action, especially in its train-set sequences and kung fu setpieces, as it is at assertively goofball humor. “Life is about chasing and being chased,” someone says. The chase here is a spirited mash-up of American-by-way-of-John Woo action, Italian spaghetti Westerns, Japanese samurai conflict and keen  pictorialism after the fashion of many Asian directors. (One of the three lead characters always comes across as an utter fool, a familiar strategy in Korean films.) Korean fighters, Chinese thugs and the Japanese army are all after the map. The music makes a few plays at emulating Ennio Morricone’s scores for Leone, but its eclectic rhythms make for its own unique, busy tapestry, making “The Good” as much a treat for the ears as the eyes. The rousing, panoramic showdown near the end of the madcap genre bubblegum can’t help but leave an audience grinning on the way out into the lobby. 127m. (Ray Pride)

“The Good, The Bad, The Weird” opens Friday at the Music Box.