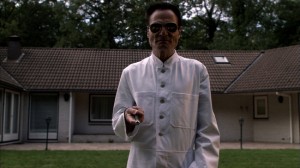 Terrible things happen in “The Human Centipede,” but once you’ve seen them, be warned, you can’t un-see them. As apt, suggestive titles go, “The Human Centipede (First Segment)” is as creepy as Dutch writer-director Tom Six’s squirmy tale of extreme depravity. A cadaverous man sits on the side of the road in a silver Mercedes, studying pictures of three dogs sniffing each other’s butts. The man is the gravel-voiced Dr. Heiter (Dieter Laser), who claims to be a retired surgeon who specialized in Siamese twins. He’s looking for victims for his latest experiment, and the final two of three are two aggravating female American tourists (Ashlynn Yennie, Ashley C. Williams) who get lost in the woods while looking for a club called “The Bunker” and arrive in the rainy night on the stoop of Dr. Heiter’s villa. Six’s chilly, clinical visual style is as effective as the nauseating central conceit, which is shown with relative discretion but with maximal conceptual horror. That’s where the now-notorious Six succeeds: he’s illustrating a coprophagic concept as much as gathering frights or making a fully accomplished film. Think of it as “The Vanishing” with involuntary invasive surgery. It’s hostile, not “Hostel.” Six claims he worked with a surgeon to design the physiognomy of his inhuman creation, but his inspiration is simpler:  “The idea of the human centipede started very simply from a sick joke I would tell friends. When we saw somebody evil on television, e.g. a child molester or someone, I would say that they should stitch his mouth to the ass of a fat truck driver, as that would be the right punishment for him. Everybody thought that was very horrible.  This became the basic idea for the human centipede.” Six was one of the originators of the worldwide series of “Big Brother.” The glassy cinematography is by the amusingly named Goof de Koning. 89m. (Ray Pride)