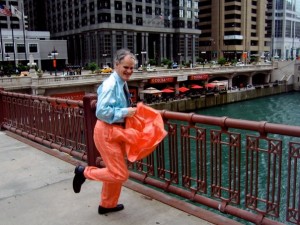 Jennifer Burns’ 2009 “Vincent: A Life In Color” is the future of documentary in the here-and-now: a hand-to-mouth portrait of a local eccentric with touching elements in the central character’s life story. There’s gonna be a lot more of them in the foreseeable future: anecdotes that could be shorts that are expanded to feature length. (Everybody thinks everybody’s got a story.) Vincent P. Falk, legally blind with extreme tunnel vision, worked as a computer programmer for Cook County and lives in a Marina City condo. In his off-hours, draped in coats of many colors, none drab, all as bold as lightning, he haunts the bridges over the Chicago River and the fishbowl windows of local television news broadcasts, often doing dervish-y spins of joy. Nicknames supposedly abound: “Fashion Man” and “Man of a Thousand Coats” as well as “Riverace” (pronounced like “Liberace”). Despite a troubled childhood, detailed at length, Vincent comes across as an odd but supremely contented man. Viewers’ taste for Vincent’s taste in puns may vary. Roger Ebert is a central supporter of “Vincent,” reviewing it last June on his website before a release was set, and programming it at his recent Ebertfest in Champaign.  96m. DigiBeta. (Ray Pride)

“Vincent: A Life In Color” opens Friday at Siskel. Burns and Falk will appear at all Friday-Sunday shows and Monday-Thursday 8pm shows. A reel of Falk’s spins-for-the-camera is embedded below.