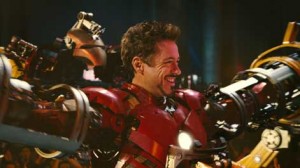 Seconds after the theater’s gone dark, high in the star-strewn sky, far above crowds of rowdy fans amped up by pounding rock music and a phalanx of cheerleaders, Iron Man rockets, then plunges, through stories-high curtains of geysering fireworks, only to land precisely with a satisfying small thud on the balls of his feet on an exact spot directly in the spotlight.

That inspiration, in the reality-television-style editing of the opening scene of Marvel (Disney)-Paramount-Jon Favreau’s “Iron Man 2” is not only a suggestive objective correlative to the innards of Robert Downey, Jr.’s essence and self-effacing speed-mumbling performance style, but also for the contemporary blockbuster: stars burst in the air, hit their marks, do a little twirl, but soon enough, the home of the brave will go fickle. And it starts with the heat-seeking zeitgeist-humpers whose commentary moves at the speed of Wi-Fi: While Robert Downey, Jr. offers up another serving of his greedy knack for scene-stealing—tempered, less manic Hamlet than Ham and “hot damn!” on wry—jaded observers yawn. Predictably, even with a battery of grumpy, dismissive reviews, “Iron Man 2” punched through the box office with an estimated $128 million in North America. Does reporting dwell on the conflicted but still jabbing commentary on the egos that run our military procurement system, or paraphrasing Eisenhower’s “the military-industrial complex” as “the military-industrial age”? Nah, most of the Monday and Tuesday morning columnizing-solemnizing questions whether money was “left on the table” for not having done a sloppy-shitty headache-inducing post-production conversion to simulated 3-D akin to the eye-bleeding swirl of muck in “Clash of the Titans.”

But it’s word-of-mouth that gives life but also kills. (“Babies,” which birthed a million dollars on Mother’s Day is deadly in its own life-affirming fashion.) In the past year, a lot has been written about “The Twitter effect,” a supposed ripple effect from the 140-character commentary of first-weekend moviegoers. It’s a serious concern, to the point that some studios have warned reviewers at advance screenings that Twitter is considered a communications medium, and even ticker-tape-brief messages shouldn’t run until reviews do. (Investors do not go gently into that Dark Knight.)

Why? Maybe it’s that rocketing-and-plummeting effect. The previous week’s champion, Freddy Krueger’s arty-artsy “Nightmare on Elm Street” re-grinding-and-sharpening, fell from the sky into a dim, distant field, dropping an estimated 72 percent from one weekend to another. The unserious business of fun becomes deadly professional. Then there’s no room left to mull how much the fluster-ated whininess of Gwyneth Paltrow’s Pepper Potts is gleaming self-parody or just the apotheosis of Pepperness and Gwyneth-osity!

Or any of the other zigs and zags in this full-to-bursting play-set. Director Jon Favreau repeats capably from the original, working from a script credited to Justin Theroux, who was cast in “Mulholland Falls,” the writer-director of “Dedication,” and a co-writer of the Downey-starring “Tropic Thunder.” There’s deft camerawork from the versatile yet unfussy Matthew Libatique, whose credits as cinematographer ranges from “Pi” to “Phone Booth,” from “Tigerland” to “Josie and The Pussycats.” This is an efficiently good-looking picture. Of course, all the multiple conflicts, the arrayed antagonists and the two-too-many beatdowns revolved around the shooting star (“Oh, it’s good to be back” is his first line.) Downey plays Tony Stark as Sir Dada. It’s an id’s movie suited for this moment. The established marks are hit, perforated. The biggest fault is likely the necessity of having to leaven setpieces and running riffs with plot. Stuff, good: plot, ehhh…

Among the cast, Mickey Rourke, a grimy, prison-tattooed Russian physicist-nemesis is eastern promises but no compromises on his deadpan idea of humorlessness; he’s a Method madman grunting and showboating. Sam Rockwell is overmatched by others in the cast, his overly energetic munitions manufacturer competitor to Stark Industries making with the flopsweat. Sam Jackson wrangles mouthfuls of superiority and a Furyous eye patch. Scarlett Johansson impresses like a creature of the catwalk: posture and pose. She’s an odalisque in a shaped black cocktail dress, at least until she’s animated into a “Mission Impossible”-style multi-baddie beat-down: still, Favreau features her face; even in kinetic play, he’s all about centering her voluptuous, louche mask of a va-va-visage in the frame. Whether smart-dumb or dumb-smart, “Iron Man 2” remains cool beans when characters aren’t clanging away at each other, and gives the long-missing Garry Shandling the role of Larry Sanders’ lifetime.