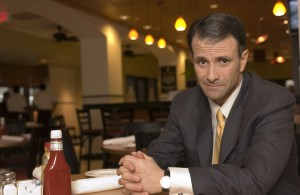 The masterful “Casino Jack and the United States of Money” is the latest from prolific Academy Award-winning documentary muckraker Alex Gibney (“Taxi to the Dark Side”), and it is as lucid, damning and infuriating as his other work. He and his deft production team weave a compelling, sardonic and elementally shocking portrait of the lobbyist and convicted swindler Jack Abramoff and his connections to the disgraced-but-not-shunned conservative money machine. It’s a heist movie with America the victim: it’s too late to reach for your wallet. Tracing decades of “selling of America,” culminating in the sacrifice of this “Jack of all cons,” this charming sacrificial goat, Gibney’s weave of archive footage, stills, effects apt music and new interviews shot by Maryse Alberti describes a sheer rock face of mountainous dishonesty and corruption. The range of avarice could stock a B-movie Bond production, starting with Indian casinos, moving on to Russian spies, hookers in Saipan, Chinese sweatshops, and an execution of a Greek casino owner in Miami. With the bonus, of course, of hiss-worthy villains like baby-faced two-face Ralph Reed, anti-government nihilist Grover Norquist and the unstoppable Newt Gingrich. While Abramoff “could sweet-talk a dog off a meat truck,” as one observer notes, “one of a kind, one of a kind,” the octopus-like interconnections between money, pseudo-religion and politics are unraveled at the velocity of a runaway train in the film’s 120-minute running time. Abramoff’s primary scams involve a politico-financial “protection racket” in the Marianas Islands, as well as theft of tens of millions of dollars from Native American tribes in the form of using lobbying money from their casinos as a geld-funnel to finance Republican politics across the country. John McCain comes in for criticism for using Abramoff as a target while turning a blind eye to crimes that were committed by others, such as fallen Speaker of the House Tom DeLay. It’s a fascinating study, even for a viewer who knows nothing of these vainglorious years. Writer Tom Frank is one of the interviewees, taken with “the spectacle of it all” while ruing the damage done to this nation by “the free market faith.” Frank observes that more than a failed system, “This is a story about human failure.” “Casino Jack” could make you wonder if democracy is over, and when it ended. Gibney writes, “I was intrigued by Abramoff because his is a larger-than-life story.  I was also drawn to one of the most important topics in our democracy right now:  how much money is in play throughout Washington and how it is manipulating and distorting the American system. Political influence has become a high-stakes game and Jack was playing that game to the hilt.” 118m. (Ray Pride)

“Casino Jack and the United States of Money” opens Friday at Landmark Century.