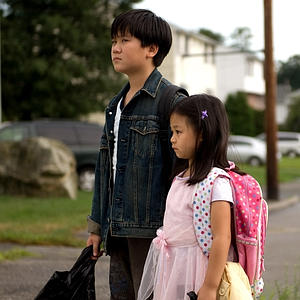 One of my favorite films that played Sundance 2009, Tze Chun’s feature debut, “Children Of Invention” is a triumph of mood in its story of a couple of adolescent kids in Boston, a brother and sister (Michael Chen and Crystal Chiu), who are left on their own when their single mother’s (Cindy Cheung) inability to get enough work leads to their eviction. Chun, Chicago-born, not only captures their dislocation and knack for invention (like their mother, whose problems grow worse when she is caught performing a scam), but a sense of childhood specific in gesture but suggestive in accumulation: he’s a terrific director of children. The weight of the fraught subject material—the endangerment of children in increasingly difficult times—is gently carried. The film’s quiet intelligence makes one anxious for Chun’s next films. The deft, direct score is by T. Griffin (“Prodigal Sons,” “A Walk Into The Sea”), the editing by Anna Boden (“Half Nelson,” “Sugar”). 95m. (Ray Pride)

“Children of Invention” opens Friday at Facets. Producer Mynette Louis will appear after the Saturday, May 15 shows for Q&As. A trailer is embedded below.