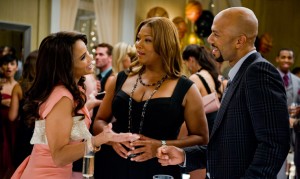 Sold as a Cinderella story, “Just Wright” is a romantic comedy that matches Leslie Wright (Queen Latifah) and basketball star Scott McKnight (Common). The obstacle to their union is Morgan (Paula Patton, “Precious”), a superficial beauty on an unbecoming manhunt. Raised under the same roof, the two women are a little like stepsisters who turn into rivals for Scott. Leslie is steadily employed as a physical therapist; Morgan is unsteady in more ways than one. Writer Michael Elliot reprises the standard romantic business of right and wrong pairings from his “Brown Sugar”(2002) with an assist from the basketball business of his “Like Mike” (2002). This film is pretty mean about Morgan’s calculating, materialist bent: at a game she peers at the players’ wives with binoculars. The ever-nurturing Leslie comes off as just naturally in touch with her singledom, as well as with Scott’s hurt knee that could end his career. If she gets little coaching from her visible copy of “The Power of Now: A Guide to Spiritual Enlightenment” by Eckhart Tolle, director Sanaa Hamri (“The Sisterhood of the Traveling Pants 2″) sounds like a new-ager when she shares: “For me, film is about capturing motion and space. It really doesn’t matter what the motion is.” As long as it gets us from one end of the court to the other to score the heartwarming win. With Phylicia Rashad, Pam Grier, James Pickens, Jr., Laz Alonso, Mehcad Brooks and a lot of NBA players. 111m. (Bill Stamets)