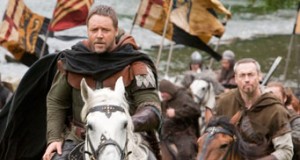 Robin Hood (Russell Crowe) is an archer with father issues. He lost his earthly father and his memory of him at age five, a repressed trauma that is revisited in flashback. (The print previewed had an ugly splice right when the word “beheading” is heard on the soundtrack to recount his dad’s ending.) Another flashback explains how Robin, crusader under King Richard the Lionhearted, lost his heavenly father and turned “godless” amidst the 1191  beheading of thousands of Muslim captives in Acre. Robin returns to England where he assumes a new identity, with the collusion of the blind father (Max von Sydow) and the able-bodied wife (Cate Blanchett) of a slain crusader. “I know little about the love between father and son,” laments Robin. He learns, as his new father tutors him to assume the mantle of his late father. Robin turns into an outlaw proto-democrat. Director Ridley Scott offers another political action film whose hero suffers faith and father deficits, like his earlier “Kingdom of Heaven.” That more-epic period drama started in 1186, just before the Third Crusade. The worthy, watchable “Robin Hood” starts in 1199, just after that adventure in the Holy Land. The screenplay by Brian Helgeland (“L. A. Confidential,” “Green Zone”) includes randy double-entendres. Think Little John in a TSA scan. Nods to French royal taste: the present king of France swallows fresh shellfish while plotting treachery, while across the channel his saucy niece favors the tongue of a future king of England with her pubic hairs. There’s a nice reversal on the classic “Could you zip me up?” scene when Robin asks Marion to unhook his chain mail prior to bathing. The ultraviolent landing on Normandy in “Saving Private Ryan” is mirrored when French invaders disembark on the opposite English shores. Slo-mo sparkly droplets cascade through this exquisite carnage. Just as Scott ended his “American Gangster” with a shot fired at the audience to reprise 1903’s “The Great Train Robbery,” “Robin Hood” opens with an arrow aimed at us. With William Hurt, Mark Strong, Mark Addy, Oscar Isaac, Eileen Atkins, Matthew Macfadyen. 139m. (Bill Stamets)