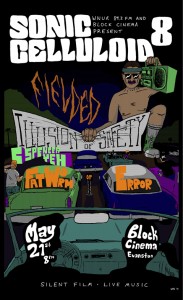 The Mary and Leigh Block Museum of Art in Evanston will play host Friday to the eighth installment of Sonic Celluloid, a joint venture between Block Cinema and WNUR 89.3FM. A marriage of silent film and live music where four bands will play accompaniment to six short screenings, what can one expect at an event called Sonic Celluloid? Even the event organizers don’t really know. Lori Crasnic booked the lineup and left the bands in charge of choosing a film to accompany and how to do so. “This is really the fun part because the bands are really in charge of everything. We never know how it’s going to be,” Crasnic says. In the past, some bands have improvised their music and others have chosen a film that fits nicely with their songs. One of this year’s bands, Fat Worm of Error from Massachusetts, has written new music specifically for Sonic Celluloid 8. “They should be interesting,” Crasnic says, “because Fat Worm of Error does a lot of performance art with their music.” The rest of the lineup includes C. Spencer Yeh, Fielded, and Illusion of Safety. With a variety of experimental silent films and bands that get to do pretty much whatever they want in an art museum, Crasnic admits that it might be a new experience for some. But because it brings together film and live music, she says “even people who don’t really like experimental music or silent film have had fun in the past.” Experiment with Sonic Celluloid May 21 at 8pm at Block Cinema.