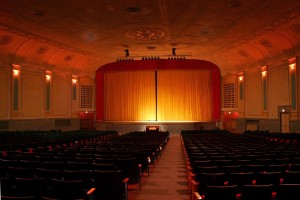 Last Thursday, Rosa Rio died in Florida at the age of 107, one of the last living theater organists from the silent film era. The theater organist provides the live score to silent films, giving characters depth, giving action life and giving a voice to the filmmakers who first brought us to the cinema. “The best compliment a theater organist can get is for someone to say I didn’t even notice it playing,” says Jay Warren, photoplay organist at the Portage Theater. When the accompaniment is one with the film, Warren says, he’s done his job like Rosa Rio and Gaylord Carter before him.

The organ at the Portage Theater is red and crescent-shaped,  encased in a white wall three feet high with an opening for its player to the right. The 1927 Kimball Pipe Organ recently rescued by the Silent Film Society of Chicago from five years of silent storage is completely functional but still in the process of renovation. Theater organs were originally a economic imperative for 1920s silent film cinemas. “Instead of paying a twenty-five member orchestra,” Warren says, “you pay one organist to be the entire accompaniment.” Ironically, the restoration process for the Silent Film Society now is an expensive engineering feat of mixing digital samplings with the original organ pipes and rewiring the 80-year-old instrument. A self-proclaimed purist, Warren says he was skeptical of the idea of digital sound at first. “They had to prove to me digital would sound right. They did. I can’t even tell the difference.”

Warren is engulfed by the rows of keys and switches on his seat at the organ. When he provides the accompaniment for a film, he composes themes for the characters, the moods and the action on screen. His organ music will fit the era of the film, giving his Portage Theater audiences the original silent film experience. His Sunday matinee accompaniment to “The Adventures of Prince Achmed” leads a journey into an Arabian night through 1920s Germany. The silent film by German animator Lotte Reiniger is a feature-length silhouette animation, the first of its kind. Reiniger spent three years cutting and placing her character silhouettes for the 70,000 frames of the film. 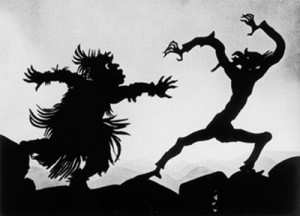 The Adventures of Prince Achmed

The performance is the first time Warren will play along with the film—no rehearsals, no mock performances. He has watched it only twice and will rely on his memorized stock of musical themes to help the audience get lost in the shadows on screen. Warren himself watches the screen along with the rest of the audience while playing its song. He occasionally glances down at keys but never loses sight of Prince Achmed. When the Prince is soaring in the sky on a magic horse from the African sorcerer, Warren’s melody is light and tranquil. Then Prince Achmed fights the Chinese emperor, serpents, demons and the evil sorcerer, to an agonizing collection of sound, and he gets the girl—Princess Pari Banou—to the delight of the rapturous organ.

When the adventure ends and the patrons applaud, Warren ascends on his organ seat to the height of the screen. The organ and organist cast a shadow on the screen from the 35MM projector and the musician’s silhouette is now silent on the big screen. He takes a bow, and the organ’s hydraulics take him back down. (Andrew Rhoades)