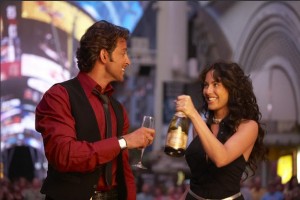 Opening on more than 200 screens this week, Anurag Basu’s “Kites” is gaudy, multiculti desi masala, an unpredictable, tonally gaga fable of fate in the form of a couple-on-the-run love story between two dancers, the Indian J. (Hrithik Roshan) and Mexican immigrant Linda (Bárbara Mori Ochoa), who longs to marry a rich American. J., a dancing instructor in Vegas, has a sideline in green-card marriages. But this time… he’s fallen in love. Unfortunately, he’s engaged to a fabulously rich woman whose violent father owns a Las Vegas casino, and whose brother is engaged to “Natasha”—his green-card ex under a new name. (The family estate is vast, making any spread in Architectural Digest seem insufficiently vulgar and nouveau; Dad, or “Bob,” is shown as a top-dog bad guy with a bit of “Reservoir Dogs”-style lobe slicing.) Plot synopsis would baffle more than the story’s unfolding, even in its fractured, post-Tarantino style, and while it’s overstuffed after the fashion of Indian pop movies, it’s still a glory of delirium. “Destiny” is repeatedly invoked, but the greatest virtue of “Kites” is that unlike an overly developed or workshopped screenplay, anything can, and does, happen. I long for an Amer-indie movie with the same lunatic verve. Exuberant diaspora kitsch ensues. It’s the most fun I had at the movies all Tuesday. The characters attempt to communicate in a fitful, yet playful amalgam of Hindi, English and Spanish (Hindishpanol?), to both comic and culturally suggestive effect. A chase scene with a pickup and dozens of police cars, tracked by helicopter along desert, moves on to hot-air balloons and freight trains. A later chase, with endearingly slipshod rollover destruction, is accompanied by a thundering pop ballad. (Who among us cannot ask, “Why does my heart exult in rapture?“) The repetitive mayhem is reminiscent, in a good way, of the late HB Halicki’s original “Gone in 60 Seconds” and his crash-and-nothing-but-crashes “The Junkman.” Sentimental foolishness alternates with vigorous extended action. A climactic shootdown in the rain with silvery shards of backlit rain and killers in black trenchcoats and black umbrellas evokes classic and latterday iconography of Hong Kong action work. Curiously, the brightly colored imagery suggests Adrian Lyne in the “Flashdance” era (with J.’s ripped-sleeve white shirt substituting for Jennifer Beals’ shredded sweatshirt), yet its circuit of double-crosses that spark the plot also evoke Lyne’s obsessive twinned themes of infidelity and betrayal. (That’s a strength, for me.) “Kites”‘ final  images allow happiness after tragedy, as if “Titanic”‘s Rose and Jack found each other in the azure After.  As curry-dusted popcorn goes, “Kites” is savory distraction. A “remix” by Brett Ratner, running around ninety minutes and satirizing the film, is opening in five cities this Friday, but not Chicago. The production entity, Reliance Big Entertainment, is one of the last of the hot-shot media conglomerates investing in worldwide entertainment, including partnering in the current incarnation of Steven Spielberg’s DreamWorks SKG. 130m and intermission. (Ray Pride)

“Kites” opens Friday at ten theaters, including Pipers Alley in the city.