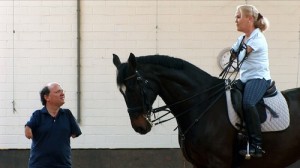 In “NoBody’s Perfect,” filmmaker Niko von Glasow composes an unlikely calendar, visiting eleven other people who were born with side effects from the drug Thalidomide, talking to them about their lives and taking nude photos for a book (and to accompany the months of the year). Glasow’s arms are short because of his mother being prescribed the drug in the prenatal stage. “The first thing people react to when they meet me is how I look. Even if they don’t say anything, they either stare or look away. They show that they’re uncomfortable around me. I can hardly blame them; I’m very uncomfortable about it myself. All my life I’ve tried not to think about my disability, tried to ignore the truth. Society needs to get used to the way we look,” Glasow writes. “Of course we look different, but it is possible to see beyond that.” In his straightforward, sometimes literally naked approach, Glasow makes a tender, darkly funny look at difference into something memorable: a portrait of adults coping in often exhilarating ways. The inventors who profited from the disfiguring drug? They’re less inclined to appear on camera. Glasow began his career as a production assistant to Rainer Werner Fassbinder; RWF’s dour wit echoes. 84m. 35mm. (Ray Pride)

“Nobody’s Perfect” plays May 25 and May 27 at Siskel. A trailer is embedded below.