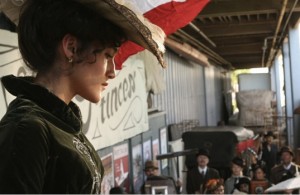 American Girl goes archipelago. Writer-director Marc Forby (one of six executive producers of “Prom Night”) fashions a scenic after-school biopic about Princess Kaiulani (1875–1899). The title royal with a fifteen-century bloodline is the niece of Queen Liliuokalani, overthrown in 1893. Q’orianka Kilcher—Pocahantas in “The New World”—plays another princess who sails to Britain and back. Unfortunately, Kilcher shows none of what Colin Farrell saw in his young co-star while shooting Terrence Malick’s 2005 film: “She’s such an insane mix of lightness and darkness of spirit. But she has a smile that could light up both hemispheres at the same time, and she has a depth of darkness which would make the world stand still.” Kaiulani is a proud teen who takes her destiny to heart. In the end, Forby frames her as self-sacrificial, a figurehead for a monarchy doomed to annexation as a U.S. territory and later statehood. I wish I could have learned more about the complex frictions between missionaries, landowners and the descendants of islanders who sacrificed Captain Cook. Forby even omits the tale of this half-Scottish princess introducing surfing to Brighton. “Princess Kaiulani” overly valorizes a multicultural role model from Obama’s birthplace. Her offscreen politics include driving “a hydrogen fuel cell zero-emissions vehicle.” Her publicists testify: “She has never pumped a single gallon of gasoline.” Kaiulani and Kilcher deserve a more vexed and voluptuous remake by the likes of Werner Herzog or Claire Denis. With Barry Pepper, Shaun Evans, Will Patton, Jimmy Yuill. 100m. (Bill Stamets)