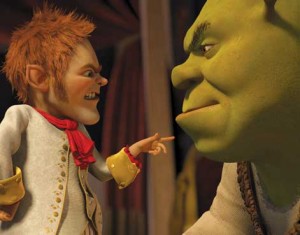 What comes after “Happily ever after”? Apparently, a midlife crisis. DreamWorks Animation’s fourth installment of the Shrek franchise opens on the domestic life of Shrek, his wife Fiona and their three kids. (Mike Myers and Cameron Diaz repeat as the characters’ voices.) The repetition of daily life shows its wear on Shrek early on, and an inevitable meltdown occurs at his children’s first birthday party. Longing for bygone days when villagers feared him, he enters into a contract with Rumpelstiltskin (Walt Dohrn) that will trade him one day as a feared ogre, for one day in his life. As with most impulse buys during a midlife crisis, buyer’s remorse comes quickly. Rumpelstiltskin chooses to trade the day Shrek was born, placing him in an alternate land of Far Far Away where no one knew he ever existed, and once the day was over? He would cease to exist entirely. If Shrek never existed, there would be no one to save Fiona, and her parents sign away their kingdom to protect her. In this land, Rumpelstiltskin reigns supreme with a gaggle of witches more than eager to do his bidding, and ogres are hunted and enslaved. Shrek then sets out to undo the effects of Rumpelstiltskin’s contract with the help of old friends who don’t even recognize him. After finding Donkey (Eddie Murphy) in the employment of witches, Shrek learns of an “exit clause” that is in every contract Rumpelstiltskin makes. If Shrek can find true love’s kiss before the day has ended, everything will return to normal. We find Fiona has busted herself out of the tower and is now the leader of an ogre resistance, and Puss in Boots (Antonio Banderas) is her spoiled overweight house cat. Fiona’s heart has hardened in this world, and it seems unlikely she can let love in. Further complications: A catastrophic failed ambush ends up with all of the ogres enslaved, with only Shrek, Fiona, Donkey and Puss left to save them. Advances in technology mean this final chapter is easily the best-looking of the quartet, with facial expressions, and elements like  movement of hair and clothing bursting with detail. While there aren’t as many memorable one-liners this time around,  the plot holds to the end. Most importantly, in a theater jammed with children, there was only laughter or attentive silence. If you can keep kids’ attention for a full hour and a half you are definitely onto something. This was my own first encounter with animated 3-D; the clarity of the images is impressive. With brief turns by John Cleese and Julie Andrews as the Princess’ parents. 93m. (Julie Gavlak)