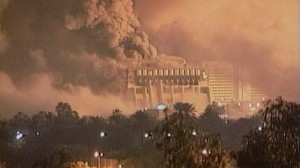 Naomi Klein’s 2007 book, “The Shock Doctrine: The Rise of Disaster Capitalism,” makes a case for latter-day capitalism taking advantage of misfortune—war (Iraq), coups (Chile), floods (post-Katrina), economic collapse (the International Monetary Fund’s strictures imposed on a still-resistant Greece)—to mask opportunistic destruction of social structures. “Only a crisis—actual or perceived—produces real change,” she quotes Milton Friedman, the key antagonist in her telling, as observing, “When that crisis occurs, the actions that are taken depend on the ideas that are lying around.” Friedman comes across in clips as a sanctimonious, smug sonofabitch, especially his head-bobbling sneer as a protester shouts during his Nobel Prize ceremony. The problem is whether Klein’s case against “the savage stream of pure capitalism” becomes a gallery of hiss-worthy villains rather than a counter-argument against social re-engineering. It’s a dense, well-constructed historical argument on the page, which Michael Winterbottom and Mat Whitecross’ adaptation engages to kinetic if mixed result. The dry Brit narration sounds both rational and dull. There’s too much in Klein’s intricately marshaled 533 pages to do more than provide a taster on-screen. Still, it’s a kaleidoscopic assembly of more than half-a-century of questionable governmental actions from around the world, and passages of Klein on the lecture circuit highlight her key themes, especially a culture and economy built upon fear. Winterbottom and Whitecross’ 2006 “The Road To Guantánamo ” packs a more concentrated punch; better yet is Winterbottom’s 2002 docudrama “In This World,” following two Afghani refugees from one world to another. A seven-minute version by Alfonso Cuarón that accompanied the first release is worth searching out on YouTube. 85m. (Ray Pride)

“The Shock Doctrine” plays Siskel May 21-25 and 27.  Line producer Phillip Koch and associate producer Sally Marschall will appear Friday. A trailer is embedded below.