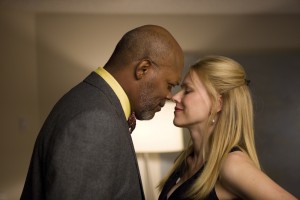 A boy and girl fumble in bright, gentle light.

A miracle: like love always is, like lovemaking, like conception. Within the first instants of Rodrigo Garcia’s fifth feature, the teenager has had a child, has given it up for adoption, decades have passed. Three women and one decision are at the core of his story, patterned as if by an unflinching god. At 14, Karen (Annette Bening) placed a baby up for adoption, a decision that still shapes her days. Elizabeth (Naomi Watts), an adopted child, grew up to become an ambitious lawyer and resolute loner. Lucy (Kerry Washington) is anxious to adopt a child. Neither Bening nor Watts fears the steeliness of their fierce characters, with wrenching performances implying troubled, troubling complexity beyond the simple storytelling.

The 50-year-old writer-director began as a cinematographer, but didn’t like his own lighting skills. He’s directed a lot of television, including the pilot of “Big Love” and episodes of “Six Feet Under,” “Carnivàle” and “In Treatment.” Still, his attention to quick, telling decors of characters’ offices and homes, and acute frames in which his actors strike their marks, reveal a cool, geometric perspective. The title is elemental, suggesting the Pietà and other Renaissance paintings. He worked on the script for almost a decade. “It took me a long time,” he says. “I showed one of the producers an incomplete version maybe three or four years ago. I showed a later version to [executive producer] Alejandro González Iñárritu, and they were both supportive. But I didn’t really finish the draft for nine years. It took me a really long time.” He smiles. “Obviously, I was doing other things.”

Garcia doesn’t consider himself a particularly slow or painstaking writer. “No. I think probably when I started writing it, I didn’t have the chops to write it,” he says, openly. (I steered clear of any reference to his father, the novelist Gabriel Garcia Marquez, wanting to hear about Garcia’s own work.) “I had only written one or two other scripts before that. I didn’t anticipate how complicated it would be, the structure of the three storylines in relation to each other. And Lucy’s happens over a few months, Elizabeth’s story over nine months, Karen’s probably takes a year and a half, and all of it is influenced by something that happened one afternoon thirty-six years ago. I was learning to write as I was writing it.”

Garcia’s preparing an Irish-set period piece with Glenn Close as a woman passing as a man, so his multi-character days may be over. “Yeah, I think the other [features I’ve done], those were multi-character because they were really mosaics of short pieces, I like the short piece, I like the minimalist approach. I like the little sample that gives you an idea of the overall. In that sense, y’know, those movies were a little bit more like… I guess they were ruled by the same principles of those pointillist painters, where you’re working on the little stuff and you hope the distance gives you an overall [view]. I’m not that interested in that right now, to tell you the truth. ‘Mother and Child’ has these strands, but I always thought they were three faces of the same story and of the same movie. I always knew they would all come together [in that particular place] the way that they did. Obviously, if you’re working on something that’s small and intimate, the more varied situations and the more different type of characters, the more you can riff on your subject matter.”

To work by implication instead of declaration? “Right. This is a movie where I really wanted not to say a lot of things. I didn’t want to say why Elizabeth felt the way she felt, why she was hurt. I didn’t want to say that Karen’s mother forced her to give up the baby, even after Karen goes to the bank to meet that man, I never explicitly say, that is that boy from the past. I think if you are telling it in different stories with different characters, it’s almost like something comes in to speak for other things. You don’t have to be so explicit.”

Overpowering, garrulous arias of speech can be marvelous, but it’s also wonderful to see what actors can do with the simplest phrases that’s so powerful on screen. To concentrate on just two of the characters, Sam Jackson, as Paul, Elizabeth’s boss at the law firm and her soon-to-be-lover, answers a blunt question at their first dinner, what did he miss about his late wife? “We were close. That’s what’s hard to come by. That’s what I miss the most about her.” Paul’s told her everything, but so has Jackson. Later, Watts says. “You don’t seem like a man who’s scared of scary things.”

“She was really able to throw it away,” Garcia says. Their first sex scene, she says, teasing their age difference, “Don’t move, old man,” and ends with—”Boy! and good boy,’ she says to him, yeah,” Garcia finishes the line.

The writing doesn’t swing from the page, announcing, “I’m dialogue, I’m dialogue!” “That’s something that is always hard for me, because I like dialogue,” Garcia says. “When I’m writing, I hate a catchphrase, [but] I hate for my characters to speak like we all speak in real life. But I don’t want the dialect to sound literary, either. So you’re always finding a way to speak that is particular to the characters and particular to your movies but not so literary that it’s stilted. That always requires work.”

In a pivotal scene, realizing Elizabeth is lost to him, Paul says quietly, “The wind changed.” Garcia laughs when I say just the line. “That’s from ‘Mary Poppins’! I just liked the idea, there’s no good reason. Well, there are many good reasons, but he knows this is how she operates. She wakes up one day and it’s time to go. But of course, he doesn’t know she’s pregnant. But the wind changed, yeah, that’s a rip-off from Mary Poppins, that lovely, repressed, sexy thing!”