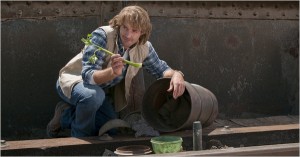 Hundreds and hundreds of fans of the “MacGruber” sketches on Saturday Night Live now get to see comics Will Forte and Kristen Wiig spoof the ABC series “MacGyver” (1985-1992) on a bigger screen with outdoor locations. New Mexico subs for Eastern Siberia, Ecuador, Colorado and South Dakota. This minor snicker cues up period tunes by Michael Bolton, Eddie Money, Gerry Rafferty and Toto. Jorma Taccone directs and co-writes, with Forte and John Solomon, an “action comedy” about the retired McGruber assembling a “dream team of killer-stoppers” to stop evil Dieter Von Cunth (Val Kilmer) from sending a stolen Russian missile to take out the unnamed president during his State of the Union address. “We love eighties action movies,” claims writer Solomon, one of the nine writers of “Extreme Movie” (2008). Free from NBC censors, he co-scripts an R-rated “multidimensional story” wherein MacGruber slits three or so throats with his bare hands, twice offers to “suck your dick” to get his way with men, sticks one stalk of celery up his ass, and, not at the same time, deflowers a female operative while heaving and grunting like a farm animal. With Ryan Phillippe, Powers Boothe, Maya Rudolph. 99m. (Bill Stamets)